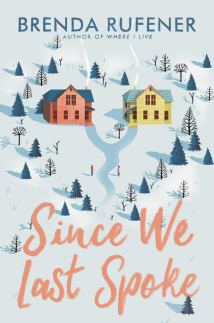 On the edge of town a beast haunts the woods, trapped in the Gray, its bonds loosening…Uprooted from the city, Violet Saunders doesn’t have much hope of fitting in at her new school in Four Paths, a town almost buried in the woodlands of rural New York. The fact that she’s descended from one of the town’s founders doesn’t help much, either—her new neighbours treat her with distant respect, and something very like fear. When she meets Justin, May, Isaac, and Harper, all children of founder families, and sees the otherworldly destruction they can wreak, she starts to wonder if the townsfolk are right to be afraid. When bodies start to appear in the woods, the locals become downright hostile. Can the teenagers solve the mystery of Four Paths, and their own part in it, before another calamity strikes?

Since We Last Spoke by Brenda Rufener

When Aggi Frank and Max Granger finally admitted their feelings for each other last December, it felt like love was beautiful and endless… until it wasn’t. A fatal car accident involving their older siblings throws their lives into sudden chaos. And with a restraining order now in place between the two bitter households, Aggi and Max’s love runs cold. Being together again seems like a distant fantasy, even though they share the same driveway. Still, Plum Lake is a small town, and staying apart can’t last forever. Aggi and Max eventually reunite at a lake-house party hosted by a mutual friend and break the ice after a year of silence. But just as they begin to rebuild their relationship, the unthinkable happens when Aggi’s little sister, Grace, ﬂees from home after their father spirals into a ﬁt of rage. With a support system of friends close by, Aggi and Max must confront each other and their families in the hopes of mending all the broken pieces.

Descendant Of The Crane by Joan He

Princess Hesina of Yan has always been eager to shirk the responsibilities of the crown, dreaming of an unremarkable life. But when her beloved father is found dead, she’s thrust into power, suddenly the queen of a surprisingly unstable kingdom. What’s more, Hesina believes that her father was murdered—and that the killer is someone close to her. Hesina’s court is packed full of dissemblers and deceivers eager to use the king’s death for political gain, each as plausibly guilty as the next. Her advisers would like her to blame the neighboring kingdom of Kendi’a, whose ruler has been mustering for war. Determined to find her father’s actual killer, Hesina does something desperate: she enlists the aid of a soothsayer—a treasonous act, punishable by death, since magic was outlawed centuries ago. Using the information provided by the sooth, and uncertain if she can trust her family, Hesina turns to Akira—a brilliant investigator who’s also a convicted criminal with secrets of his own. With the future of Yan at stake, can Hesina find justice for her father? Or will the cost be too high?

How To Make Friends With The Dark by Kathleen Glasgow

Here is what happens when your mother dies. It’s the brightest day of summer and it’s dark outside. It’s dark in your house, dark in your room, and dark in your heart. You feel like the darkness is going to split you apart. That’s how it feels for Tiger. It’s always been Tiger and her mother against the world. Then, on a day like any other, Tiger’s mother dies. And now it’s Tiger, alone. Here is how you learn to make friends with the dark.

The Weyward family has been haunted by a curse for generations—if a Weyward falls in love before their seventeenth birthday, the person they love dies. Sam doesn’t plan to fall for anyone in the nine weeks before his birthday. He’ll spend his time working at the Eezy-Freeze with his dad; cooking up some midsummer magic with his grandmother, great-grandmother, and great-great-grandmother (the Grands); and experimenting with drag with the help of the queens at the Shangri-La, the local gay club. But when a new guy comes to town, Sam finds himself in trouble when they strike up a friendship that might be way more than that. As Sam’s birthday approaches and he still hasn’t quite fallen in love, the curse seems to get more powerful and less specific about who it targets. A mysterious girl Sam talks to on the phone late at night and a woman he’s only seen in a dream might have the answers he’s been looking for—but time is running out to save the people he cares about.

The Meaning Of Birds by Robin Jaye Brown

Before, Jessica has always struggled with anger issues, but come sophomore year that all changes when Vivi crashes into her life. As their relationship blossoms, Vivi not only helps Jess deal with her pain, she also encourages her to embrace her talent as an artist. And for the first time, it feels like the future is filled with possibilities. After In the midst of senior year, Jess’s perfect world is erased when Vivi suddenly passes away. Reeling from the devastating loss, Jess pushes everyone away, and throws out her plans to go to art school. Because art is Vivi and Vivi is gone forever. Desperate for an escape, Jess gets consumed in her work-study program, letting all of her dreams die. Until she makes an unexpected new friend who shows her a new way to channel her anger, passion, and creativity. Although Jess may never draw again, if she can find a way to heal and room in her heart, she just might be able to forge a new path for herself without Vivi. 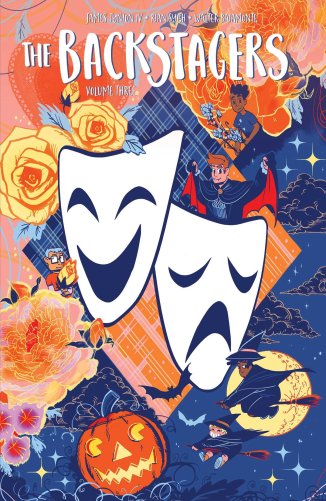 Shades Of Magic, Vol.1: The Steel Prince by V.E. Schwab

Delve into the thrilling, epic tale of the young and arrogant prince Maxim Maresh, long before he became the king of Red London and adoptive father to Kell, the lead of A Darker Shade of Magic! The youthful Maresh is sent to a violent and unmanageable port city on the Blood Coast of Verose, on strict orders from his father, King Nokil Maresh, to cut his military teeth in this lawless landscape. There, he encounters an unruly band of soldiers, a lawless landscape, and the intoxicatingly deadly presence of the newly returned pirate queen, Arisa…

All the world’s a stage . . . but what happens behind the curtain is pure magic—literally! The Backstagers are back in (stage) blacks, for a festive collection of Valentine’s Day and Halloween stories! Join Jory and the rest of the Backstagers as they wrestle with anti-Valentine crusades, totally creepy phantoms (NOT of the opera), and the everpresent magic of the backstage world in this romantically spooky third volume of the hit series.  Reuniting the Prism Award-winning team of writer James Tynion IV (Detective Comics, Justice League) and artist Rian Sygh, along with a variety of fan-favorite artists including Brittney Williams (Goldie Vance), Caitlin Rose Boyle (Jonesy), Katy Farina (Steven Universe), and more, these holiday tales will fill your heart with love, spooky spectres, and chocolate. Lots…and lots…of chocolate.

And there you have it! All of the books that I am the most excited for coming in the month of April! Have I missed any? Which books are you the most exited for?

3 thoughts on “Most Anticipated Releases: April 2019!”