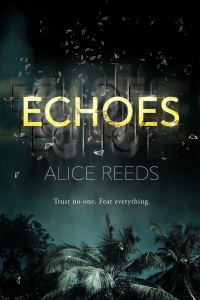 Format: eARC via the Publisher

They wake on a deserted island. Fiona and Miles, high school enemies now stranded together. No memory of how they got there. No plan to follow, no hope to hold on to. Each step forward reveals the mystery behind the forces that brought them here. And soon, the most chilling discovery: something else is on the island with them. Something that won’t let them leave alive.

Well, this definitely had ALL the twists and turns. However, it doesn’t answer half of the questions that you will have, but it does set up for a sequel…

The mystery. This book is hella intriguing all thanks to the crazy mystery throughout the entire thing. You literally don’t know what the hell is going on right from the very start of this novel, all the way until the very end. I still have no idea what the heck I just read, and I kind of like that? It reminded me of one of those really good Netflix series that literally gives you the bare minimum when it comes to answers (*cough* Dark *cough*), that literally makes you beg for more. A.K.A. I would love to read the sequel as soon as possible…because there will be a sequel right? There has to be a sequel.

The alternating timelines. I love a book with alternate timelines. What was special about them in this case is that you really think you know which timeline came first, but as you read on you stop and think…wait, did this happen BEFORE the other sequence of events?! It isn’t clearly labeled in terms of time, only in place (ie. Berlin, The Island) so really, you have no clue. Also, the ending really makes you question what came first, or if it was even real in the first place. Mind = Blown.

The concept. Honestly, this felt super creative to me. I would watch the heck out of this if it were turned into some sort of television/Netflix series. It definitely has that ‘it’ factor that makes it stand out from the rest.

The writing style. Unfortunately, the writing style wasn’t really doing it for me. It felt long-winded at times and over explanatory. I found myself skimming at times so I could get to the point/action again. It wasn’t all bad, but I think it could have used a bit more polishing.

The pacing. As mentioned above, there were moments that dragged a little. Maybe that was partially a personal thing as I really wanted to know what was going to happen next and I really wanted more answers, so maybe my brain just wanted to skip everything else, but the pacing felt off to me. There were moments that went by so quickly while others did not, which caused me to take a little longer to read this novel than I would have liked.

Overall, Echoes has so much potential! It is creative and really keeps you captivated and wanting more answers! I really do want to read the sequel (cause there will be a sequel…RIGHT?!) and see how the author grows. But mostly, I need to know WHAT THE HECK is happening!

Alice Reeds was born in a small town in Germany but spent her first eight years in Florida, USA. Later on, she moved back to Europe, where her family moved around a lot. She was raised trilingual and has a basic understanding of Russian, read and spoken. After getting her International Baccalaureate Diploma, Alice is studying English Language and Literature at University. In her free time Alice mostly writes, reads, figure and/or roller skates, or watches countless let’s plays and figure skating videos.