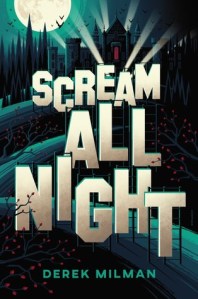 Format: eARC provided by the publisher

*Disclaimer: A digital ARC of Scream All Night by Derek Milman was provided to me by the publisher via Eidelweiss in exchange for an honest review. This does not effect my opinion in any way.

Dario Heyward knows one thing: He’s never going back to Moldavia Studios, the iconic castle that served as the set, studio, and home to the cast and crew of dozens of cult classic B-horror movies. It’s been three years since Dario’s even seen the place, after getting legally emancipated from his father, the infamous director of Moldavia’s creature features. But then Dario’s brother invites him home to a mysterious ceremony involving his father and a tribute to his first film—The Curse of the Mummy’s Tongue. Dario swears his homecoming will be a one-time visit. A way for him to get closure on his past—and reunite with Hayley, his first love and costar of Zombie Children of the Harvest Sun, a production fraught with real-life tragedy—and say good-bye for good. But the unthinkable happens—Dario gets sucked back into the twisted world of Moldavia and the horrors, both real and imagined, he’s left there. With only months to rescue the sinking studio and everyone who has built their lives there, Dario must confront the demons of his past—and the uncertainties of his future. But can he escape the place that’s haunted him his whole life?

I was really hoping to like this one more than I did. Don’t get me wrong, it was still enjoyable and quite unique, but I just couldn’t get into the writing style. Scream All Night had a lot of things going on within the story and I think it struggled to decide what kind of story it wanted to be.

Cult classic feel. I love everything about cult classic films, books, television etc. Literally, it’s some of the best pop culture that I have ever devoured. Scream All Night had that same feel to me. It felt very Kubrick-esque even though that’s not the genre I think it that it was going for as Scream All Night definitely focused more on the horror sub-genre of cult classic filmmaking. Think creature features that are so cheesy they’re somehow fantastic. I loved that Scream All Night made me feel like I was in the twisted behind the scenes world of avant-garde filmmaking and the process, technical and personal, behind it all.

Familial aspect. One of the best parts about this whole story was the familial aspect of it. The idea of the Moldavia production company being formed by a literal family of misfits that all live together in a giant gothic mansion in a secluded area really adds to the whole cult-classic vibe that I mentioned above. I loved that at the root of this giant family, was an actual biologically related one that was so completely messed up, it relied on the outsiders to hold it together. The idea of all of the cast, crew, etc. living in the same mansion where they also make all their films painted a really amazing  picture and really set the tone for this story.

Important discussions. Scream All Night did delve into the topics of child abuse and child labour. Mixing in family with work isn’t always the best idea, especially when you’re father is slightly insane. Our main character, Dario, suffered as a child thanks to his perfectionist father that needed his films to be perfect. This caused Dario to be overworked as a child actor and abused by his father to get the perfect shot. Scream All Night showed how this broke their family apart rather than keep it, and Moldavia, together as was the original intention for the production studio.

Slow moving. It took me a lot longer to get through this novel than I had hoped it would. I found it dragged on for me and wasn’t really going anywhere. Sure, there was a sense of purpose that the characters needed to conquer and a problem that they needed to work together to fix, but it just took way too long to get there.

Didn’t know what it wanted to be. One of the main opening scenes, as well as many other moments throughout the novel, felt very over the top which made this story feel almost satirical. I couldn’t take it seriously at times and for the most part, it felt like it wanted to be too many different things. It wanted horror, and drama and romance, unfortunately these themes didn’t blend well together for me at all.

A little bland. Unfortunately, this story ended up feeling slightly bland to me. Sure, there were a lot of over-the-top theatrical moments, but they just didn’t do anything for me.  I felt absolutely nothing when it came to the romance within the story, and that is probably because I felt absolutely nothing towards any of the characters. I couldn’t relate to any of them and none of them were memorable or likable in my opinion. I hate to blame the author’s writing style, but I think that may have been what did this book in for me personally.

Overall, this story had a great concept and had the potential to be something that I would love but unfortunately didn’t quite get there for me. 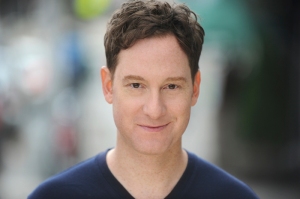 Derek Milman was born in New York City, but grew up in Westchester, NY, where he wrote and published a successful underground humor magazine that caught the attention of the New York Times, who wrote a profile on him at the age of 14. Derek studied English, Creative Writing, and Theater at Northwestern University. He began his career as a playwright (his first play was staged in New York City when he was just out of college), and earned an MFA in acting at the Yale School of Drama. Derek has performed on stages across the country, and appeared in numerous TV shows and films, working with two Academy Award winning film directors. Scream All Night is Derek’s debut YA novel. He currently lives in Brooklyn where he is hard at work on his next book.

One thought on “#Review: Scream All Night by Derek Milman”