Set in a future where consciousness is digitized and stored, a prisoner returns to life in a new body and must solve a mind-bending murder to win his freedom.

I remember seeing the trailer for Altered Carbon before its release and thinking that it would totally be something that I would enjoy the hell out of. I still think that would have been the case if a few things were done differently. It’s not that I hated this series by any means, but I definitely did not love it as much as I thought I would.

How fucking weird it was. I know what you’re probably thinking. This sounds like something that should be in the “What I Didn’t Like” category. This may be true, but I’m weird and therefore I like weird. I loved how over the top this show was. How out of the norm it was. Sure, a lot of people were comparing it to previous sci-fi films/television shows, but for me, it felt very original and different. Weird and strange almost guarantees a like from me, therefore I loved how fucking weird it was.

The beautiful cinematography. Not only was the futuristic landscape amazing to look at, but the colours and overall tone of the show made it that much more appealing. I love anything futuristic and sci-fi-esque, and Altered Carbon had it all. If anything, it was visually stunning.

Confusion overload. While I like weird and strange, I like a weird and strange the eventually starts to make sense. Maybe it was just me, but I had a really hard time making sense out of a lot that was happening. There were moments that were supposed to feel like a big reveal, but ultimately just left me wondering how the heck we got to this place. While it’s okay for things to be confusing at first, I’m the type of person that needs answers eventually. While Altered Carbon does give you answers, they weren’t always clear and left me feeling as though I was missing a piece of the puzzle. I feel like this is one of those shows that could benefit from a second viewing, although I don’t think I have the patience to sit through the whole thing again.

Hard to get through. It took me way too long to binge this one. I started out strong and the mystery and intrigue really had me. But then (see above) things started to get confusing, I started to feel lost and therefore I took my time in continuing to watch the series. I didn’t have the sense of urgency to watch the next episode as I have with other shows like Stranger Things & Dark, which was ultimately very disappointing.

Acting was just okay. Let me start by saying that I have a love/hate relationship with Joel Kinnaman. I really enjoyed him in The Killing, but he was just okay in Robocop. Honestly, I really did enjoy his performance in Altered Carbon as Takeshi Kovacs, however…I’m now realizing that all three of these characters are kind of starting to blend together for me personally. Is it the projects he chooses? Maybe? Who knows, but I’m going to need to see something different from him soon, or I may start to get bored. In the case of Takeshi Kovacs, I much prefer Will Yun Lee’s performance over Joel Kinnaman’s. There were a lot of different characters within Altered Carbon and I think I much preferred the performances of some of the smaller roles. 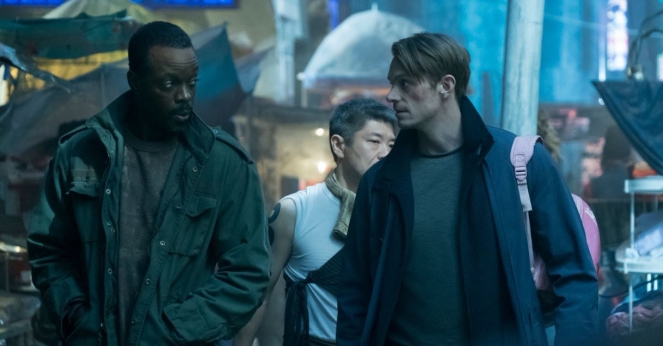 Overall, I think Altered Carbon had the potential to be something that I could have really enjoyed, but unfortunately fell a little flat. I’ve never read the book and I know absolutely nothing about it, so I’m not sure if this story continues or if there are more books in the series, but I really do hope that if Netflix orders another season, that they improve their game just a little.