At a top secret research facility in the 1960s, a lonely janitor forms a unique relationship with an amphibious creature that is being held in captivity.

I had been meaning to watch The Shape Of Water ever since I heard it was going to be screening at the Toronto International Film Festival (TIFF) this past September. As some of you may know, I have been volunteering with TIFF for the past four years now and because of this, I have been able to attend a fair amount of film screenings! I tried my hardest to get in to see The Shape Of Water, but unfortunately it was just too popular and completely sold out. I did however volunteer during one of the screenings and I promise you, it was a full house.

Recently, on a 14 hour flight to South Korea, I was scrolling through my in-flight movie choices, and would you look at that, it was there! We had barely even taken off and I had my headphones plugged in and ready to dive in! 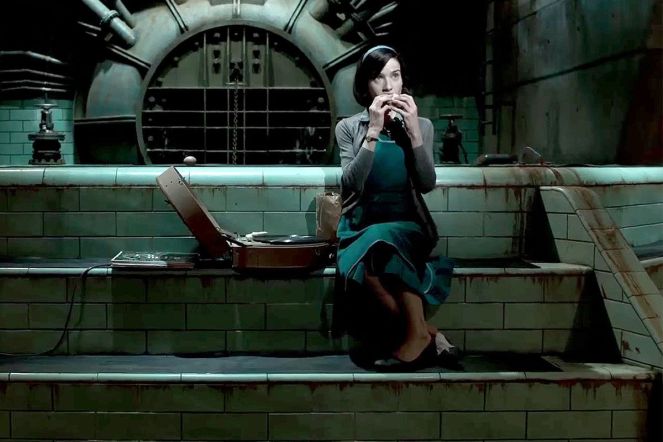 Let’s start off by saying that this film was extremely hyped from the very beginning. The TIFF screenings were packed, it was nominated for countless awards at countless award ceremonies and literally everyone was talking about it. Needless to say, I had really high hopes for this one.

Right off the bat, the cinematography was absolutely stunning. It was gloomy and dark, but in the most elegant way? Not to mention, this entire film was shot on location in Toronto and the surrounding area which made some of what I saw very recognizable. Fun fact: the theatre that Elisa lives above is the Elgin/Winter Garden theatre in Toronto. When The Shape Of Water was screened at TIFF, it was only being shown in that theatre. So the people in the theatre were literally watching the film on the set it was filmed on! Crazy right? It’s also a BEAUTIFUL theatre so I highly recommend checking it out if you ever have a chance!

The beautiful cinematography was accompanied by a beautiful musical score. By the opening sequence of the film, the musical score had already set the tone of the film. It was whimsical and ethereal and fit perfectly with the story.

The story itself was pretty memorable and it took a unique take on the forbidden romance trope. I know a lot of reviewers were turned off by a human falling in love with an amphibious creature, but honestly I can’t for the life of me figure out why? I’ve seen way more disturbing content in media than that and it’s not like human’s have never fallen in love with non-human creatures in sci-fi/fantasy films before. I’m sorry, I just really don’t understand the controversy surrounding that.

Overall, I really did enjoy this film and I’m glad I was able to finally watch it! I would definitely watch this one again!