It’s that time of year again. You know, the time when you look back and realized you somehow managed to ignore some of your most anticipated reads of the year. I don’t know how this happens every year, but it seems like there’s always those few books that you were super excited for, but somehow had no spare time to read! Here are some of the books that I really wanted to read in 2017, but somehow managed to neglect.

The Inexplicable Logic Of My Life by Benjamin Alire Saenz

Everything is about to change. Until this moment, Sal has always been certain of his place with his adoptive gay father and their loving Mexican-American family. But now his own history unexpectedly haunts him, and life-altering events force him and his best friend, Samantha, to confront issues of faith, loss, and grief. Suddenly Sal is throwing punches, questioning everything, and discovering that he no longer knows who he really is—but if Sal’s not who he thought he was, who is he?

The Hate U Give by Angie Thomas

Sixteen-year-old Starr Carter moves between two worlds: the poor neighborhood where she lives and the fancy suburban prep school she attends. The uneasy balance between these worlds is shattered when Starr witnesses the fatal shooting of her childhood best friend Khalil at the hands of a police officer. Khalil was unarmed. Soon afterward, his death is a national headline. Some are calling him a thug, maybe even a drug dealer and a gangbanger. Protesters are taking to the streets in Khalil’s name. Some cops and the local drug lord try to intimidate Starr and her family. What everyone wants to know is: what really went down that night? And the only person alive who can answer that is Starr. But what Starr does or does not say could upend her community. It could also endanger her life.

Rumor Mora fears two things: hellhounds too strong for him to kill, and failure. Jude Welton has two dreams: for humans to stop killing monsters, and for his strange abilities to vanish. But in no reality should a boy raised to love monsters fall for a boy raised to kill them. Nyx Llorca keeps two secrets: the moon speaks to her, and she’s in love with Dahlia, her best friend. Braeden Tennant wants two things: to get out from his mother’s shadow, and to unlearn Epsilon’s darkest secret. They’ll both have to commit treason to find the truth. During one twenty-seven-hour night, if they can’t stop the war between the colonies and the monsters from becoming a war of extinction, the things they wish for will never come true, and the things they fear will be all that’s left.

The Love Interest by Cale Dietrich

There is a secret organization that cultivates teenage spies. The agents are called Love Interests because getting close to people destined for great power means getting valuable secrets. Caden is a Nice: the boy next door, sculpted to physical perfection. Dylan is a Bad: the brooding, dark-souled guy who is dangerously handsome. The girl they are competing for is important to the organization, and each boy will pursue her. Will she choose the Nice or the Bad? Both Caden and Dylan are living in the outside world for the first time. They are well-trained and at the top of their games. They have to be—whoever the girl doesn’t choose will die. What the boys don’t expect are feelings that are outside of their training. Feelings that could kill them both.

For the millions who log in every day, Warcross isn’t just a game—it’s a way of life. The obsession started ten years ago and its fan base now spans the globe, some eager to escape from reality and others hoping to make a profit. Struggling to make ends meet, teenage hacker Emika Chen works as a bounty hunter, tracking down players who bet on the game illegally. But the bounty hunting world is a competitive one, and survival has not been easy. Needing to make some quick cash, Emika takes a risk and hacks into the opening game of the international Warcross Championships—only to accidentally glitch herself into the action and become an overnight sensation. Convinced she’s going to be arrested, Emika is shocked when instead she gets a call from the game’s creator, the elusive young billionaire Hideo Tanaka, with an irresistible offer. He needs a spy on the inside of this year’s tournament in order to uncover a security problem . . . and he wants Emika for the job. With no time to lose, Emika’s whisked off to Tokyo and thrust into a world of fame and fortune that she’s only dreamed of. But soon her investigation uncovers a sinister plot, with major consequences for the entire Warcross empire.

After a shout-out from one of the Internet’s superstar vloggers, Natasha “Tash” Zelenka finds herself and her obscure, amateur web series, Unhappy Families, thrust into the limelight: She’s gone viral. Her show is a modern adaptation of Anna Karenina—written by Tash’s literary love Count Lev Nikolayevich “Leo” Tolstoy. Tash is a fan of the forty thousand new subscribers, their gushing tweets, and flashy Tumblr GIFs. Not so much the pressure to deliver the best web series ever. And when Unhappy Families is nominated for a Golden Tuba award, Tash’s cyber-flirtation with Thom Causer, a fellow award nominee, suddenly has the potential to become something IRL—if she can figure out how to tell said crush that she’s romantic asexual. Tash wants to enjoy her newfound fame, but will she lose her friends in her rise to the top? What would Tolstoy do? 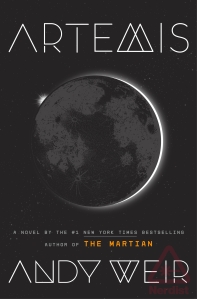 Jazz Bashara is a criminal. Well, sort of. Life on Artemis, the first and only city on the moon, is tough if you’re not a rich tourist or an eccentric billionaire. So smuggling in the occasional harmless bit of contraband barely counts, right? Not when you’ve got debts to pay and your job as a porter barely covers the rent. Everything changes when Jazz sees the chance to commit the perfect crime, with a reward too lucrative to turn down. But pulling off the impossible is just the start of her problems, as she learns that she’s stepped square into a conspiracy for control of Artemis itself—and that now, her only chance at survival lies in a gambit even riskier than the first.

Kiko Himura has always had a hard time saying exactly what she’s thinking. With a mother who makes her feel unremarkable and a half-Japanese heritage she doesn’t quite understand, Kiko prefers to keep her head down, certain that once she makes it into her dream art school, Prism, her real life will begin. But then Kiko doesn’t get into Prism, at the same time her abusive uncle moves back in with her family. So when she receives an invitation from her childhood friend to leave her small town and tour art schools on the west coast, Kiko jumps at the opportunity in spite of the anxieties and fears that attempt to hold her back. And now that she is finally free to be her own person outside the constricting walls of her home life, Kiko learns life-changing truths about herself, her past, and how to be brave.

The Wicker King by K. Ancrum

The Wicker King is a psychological young adult thriller that follows two friends struggling as one spirals into madness. When August learns that his best friend, Jack, shows signs of degenerative hallucinatory disorder, he is determined to help Jack cope. Jack’s vivid and long-term visions take the form of an elaborate fantasy world layered over our own—a world ruled by the Wicker King. As Jack leads them on a quest to fulfill a dark prophecy in this alternate world, even August begins to question what is real or not. August and Jack struggle to keep afloat as they teeter between fantasy and their own emotions. In the end, each must choose his own truth.

As the tomboy daughter of the town’s preacher, Billie McCaffrey has always struggled with fitting the mold of what everyone says she should be. She’d rather wear sweats, build furniture, and get into trouble with her solid group of friends: Woods, Mash, Davey, Fifty, and Janie Lee. But when Janie Lee confesses to Billie that she’s in love with Woods, Billie’s filled with a nagging sadness as she realizes that she is also in love with Woods…and maybe with Janie Lee, too. Always considered “one of the guys,” Billie doesn’t want anyone slapping a label on her sexuality before she can understand it herself. So she keeps her conflicting feelings to herself, for fear of ruining the group dynamic. Except it’s not just about keeping the peace, it’s about understanding love on her terms—this thing that has always been defined as a boy and a girl falling in love and living happily ever after. For Billie—a box-defying dynamo—it’s not that simple.

The illustrated story of a lonely alien sent to observe Earth, where he meets all sorts of creatures with all sorts of perspectives on life, love, and happiness, while learning to feel a little better about himself—based on the enormously popular Twitter account. Here is the unforgettable story of Jomny, an alien sent to study Earth. Always feeling apart, even among his species, Jomny feels at home for the first time among the earthlings he meets. There is a bear tired of other creatures running in fear, an egg struggling to decide what to hatch into, a turtle hiding itself by learning camouflage, a puppy struggling to express its true feelings, and many more. The characters are unique and inventive—bees think long and hard about what love means, birds try to eat the sun, nothingness questions its own existence, a ghost comes to terms with dying, and an introverted hedgehog slowly lets Jomny see its artistic insecurities. At the same time, Jomny’s curious presence allows these characters to open up to him in ways they were never able to before, revealing the power of somebody who is just there to listen.

What books were you really excited about this year, but managed to somehow neglect? Hey…there’s still a few more weeks left of the year! Maybe I can squeeze a few of these in! Wish me luck!

3 thoughts on “New Releases I Regretfully Neglected in 2017”