November has some AMAZING new releases coming our way and I can’t wait for so many of them! They all seem like fantastic reads! Here is a list of the books that I’m the most excited about that will be released next month!

The Renegades are a syndicate of prodigies—humans with extraordinary abilities—who emerged from the ruins of a crumbled society and established peace and order where chaos reigned. As champions of justice, they remain a symbol of hope and courage to everyone…except the villains they once overthrew. Nova has a reason to hate the Renegades, and she is on a mission for vengeance. As she gets closer to her target, she meets Adrian, a Renegade boy who believes in justice—and in Nova. But Nova’s allegiance is to a villain who has the power to end them both. 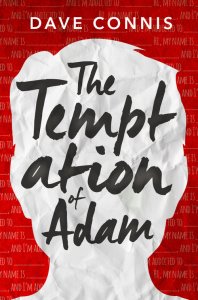 The Temptation Of Adam by Dave Connis

Jazz Bashara is a criminal. Well, sort of. Life on Artemis, the first and only city on the moon, is tough if you’re not a rich tourist or an eccentric billionaire. So smuggling in the occasional harmless bit of contraband barely counts, right? Not when you’ve got debts to pay and your job as a porter barely covers the rent. Everything changes when Jazz sees the chance to commit the perfect crime, with a reward too lucrative to turn down. But pulling off the impossible is just the start of her problems, as she learns that she’s stepped square into a conspiracy for control of Artemis itself—and that now, her only chance at survival lies in a gambit even riskier than the first.

When magic returned to the world, it could have saved humanity, but greed and thirst for power caused mankind’s downfall instead. Now once-human monsters called Howls prowl abandoned streets, their hunger guided by corrupt necromancers and the all-powerful Kin. Only Hunters have the power to fight back in the unending war, using the same magic that ended civilization in the first place. But they are losing. Tenn is a Hunter, resigned to fight even though hope is nearly lost. When he is singled out by a seductive Kin named Tomás and the enigmatic Hunter Jarrett, Tenn realizes he’s become a pawn in a bigger game. One that could turn the tides of war. But if his mutinous magic and wayward heart get in the way, his power might not be used in favour of mankind. If Tenn fails to play his part, it could cost him his friends, his life…and the entire world.

Fragments of the Lost by Megan Miranda

Jessa Whitworth knew she didn’t belong in her ex-boyfriend Caleb’s room. But she couldn’t deny that she was everywhere—in his photos, his neatly folded T-shirts, even the butterfly necklace in his jeans pocket…the one she gave him for safe keeping on that day. His mother asked her to pack up his things—even though she blames Jessa for his accident. How could she say no? And maybe, just maybe, it will help her work through the guilt she feels about their final moments together. But as Jessa begins to box up the pieces of Caleb’s life, they trigger memories that make Jessa realize their past relationship may not be exactly as she remembered. And she starts to question whether she really knew Caleb at all. Each fragment of his life reveals a new clue that propels Jessa to search for the truth about Caleb’s accident. What really happened on the storm-swept bridge?

There’s nowhere to hide. Not when you’re an Effigy. No matter where they go, Maia and the other Effigies can’t escape the eyes of the press—especially not after failing to capture Saul, whose power to control the monstrous Phantoms has left the world in a state of panic. It’s been two months since Saul’s disappearance, and there’s still no sign of him, leaving the public to wonder whether the Sect—and the Effigies—are capable of protecting anyone. When Saul suddenly surfaces in the middle of the Sahara desert, the Sect sends Maia and her friends out after him. But instead of Saul, they discover a dying soldier engineered with Effigy-like abilities. Even worse, there may be more soldiers like him out there, and it looks like the Effigies are their prime targets. Yet the looming danger of Saul and this mysterious new army doesn’t overshadow Maia’s fear of the Sect, who ordered the death of the previous Fire Effigy, Natalya. With enemies on all sides and the world turning against them, the Effigies have to put their trust in each other—easier said than done when secrets threaten to tear them apart.

There you have it! All of the books that I am the most excited about that will be released next month! Can November be here now please?