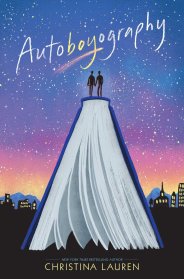 This was just so beautiful and so well written. I absolutely loved it.

Three years ago, Tanner Scott’s family relocated from California to Utah, a move that nudged the bisexual teen temporarily back into the closet. Now, with one semester of high school to go, and no obstacles between him and out-of-state college freedom, Tanner plans to coast through his remaining classes and clear out of Utah. But when his best friend Autumn dares him to take Provo High’s prestigious Seminar—where honor roll students diligently toil to draft a book in a semester—Tanner can’t resist going against his better judgment and having a go, if only to prove to Autumn how silly the whole thing is. Writing a book in four months sounds simple. Four months is an eternity. It turns out, Tanner is only partly right: four months is a long time. After all, it takes only one second for him to notice Sebastian Brother, the Mormon prodigy who sold his own Seminar novel the year before and who now mentors the class. And it takes less than a month for Tanner to fall completely in love with him.

Okay so, I usually write my reviews with a “What I Liked” section and a “What I Didn’t Like” section, but for some reason, I’m finding it very difficult to write this review that way. I think it might be because I’m having trouble pinpointing the things that I loved about this book. It was more just a love for the entire thing.

First things first, I absolutely adored this book. It was extremely fast paced, it dealt with tough issues surrounding topics such as religion and sexuality and it was downright adorable. I loved that this book was able to work religion into an LGBTQIA+ coming of age story which is something that we don’t see too often in YA, but that is extremely common in reality. Religion is such a tough thing to talk about without the risk of offending anyone and I think maybe that might be the reason that the topic is generally avoided in YA, especially in an LGBTQIA+ coming of age story.

I think the authors did a fantastic job in combining the topic of religion and sexuality into one very important story. I myself am not Mormon, but it seems like talking about that specific religion when it comes to two characters who are part of the LGBTQIA+ community is a very daunting task. I think that all things considered, it was handled wonderfully. They were able to talk about both religion and sexuality without any bias and without making one side look like the bad guy, which I can imagine must have been really hard to do.

The only thing about this book that made me take off half a star was the insta-love. It felt a little to quick and instant, but it wasn’t terrible. I just wish there was a little bit more of a slow burn there.

Overall, Autoboyography is a beautiful book that contains a very important story. I highly recommend picking this one up.

Yes, there are two of us! Lauren (on the left) and Christina (on the right). Christina Lauren is the combined pen name of long-time writing partners/besties/soulmates Christina Hobbs and Lauren Billings. The #1 international bestselling coauthor duo writes both Young Adult and Adult Fiction, and together has produced fourteen New York Times bestselling novels. They are published in over 30 languages, have received multiple starred reviews from Kirkus Reviews and Library Journal, won both the Seal of Excellence and Book of the Year from RT Magazine, and have been featured in publications such as Forbes, The Washington Post, Time, Entertainment Weekly, O Magazine and more. Their third YA novel, Autoboyography will be released in September, followed by a contemporary romance, Roomies in December.

@lolashoes (Lauren) & @seeCwrite (Christina) on Twitter. On Tumblr! where we post kissing gifs and writerly stuff and Wattpad for short stories and sneak peeks!