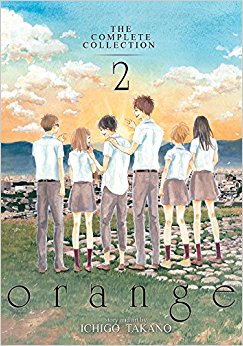 First things first, I won’t be writing as in-depth a review for this volume as I did for book number one. Not because I didn’t love it as much, because I definitely did, but because my thoughts are mostly the same. This second volume wasn’t like a separate story arc or anything, it literally just continued right where we left off in book one. Orange is definitely more like one long story.

I will say that I probably wasn’t emotionally prepared to jump from the first book right into the second as quickly as I did. I just wanted to keep reading so badly, I didn’t think about how much my emotions wouldn’t be able to handle it. I was so anxious because I really didn’t want the story to end in a way that would make me bawl my eyes out. Thank God the ending didn’t end up being what I was bracing myself for, but it definitely still played with my emotions.

I liked that this second book went more in depth with the idea of multiple timelines that was first presented in book number one. I also liked that it even delved deeper into how Naho and her friends received letters from their future selves, even though it was a little vague. I’m not sure I really one hundred percent loved the explanation, but I don’t think that’s really the main point to this story to be honest.

One thing that was different about this volume that I absolutely loved was that we got a whole chapter/issue that told the story of Kakeru right up until his untimely death, before Naho and her friends were informed on how to change the past. We got to take a look into Kakeru and his mind and why he did what he did. It was one of the darker and sadder chapters, but I’m really glad we got to see the story from his perspective, even if it was for only one quick chapter.

I won’t lie, the ending to this entire story felt a little abrupt. I don’t know if that was just me being bitter and wanting this story to never end, but I feel like it could have been extended just a little bit longer. I’m still not going to take any points off for that though…this story was just too good and hit me in way too many feels.

One question I do have though…why was this series called Orange? Did I miss something? 😂