It’s the end of the month & you know what that means…it’s time for a monthly book haul! Below, you will find a list of all of the books I purchased/received this month! I’ve actually been pretty good this month and I didn’t purchase as many as usual! I’m trying to trim down that TBR pile! Let’s take a look at what I picked up this month!

Here is a short list of books that I purchased for myself from Indigo (the Canadian version of Barnes and Noble) this month! I usually only purchase books when they’re on sale as Canadian books prices are on another level, but I couldn’t resist these three new releases!

A young, street-savvy runaway looking for a place to call home realizes he might have conned his way into the wrong family in this fast-paced and thrilling novel from award-winning author Cristin Terrill. When ten-year-old Daniel Tate went missing from one of California’s most elite communities, he left no trace. He simply vanished. Six years later, when he resurfaces on a snowy street in Vancouver, he’s no longer the same boy. His sandy hair is darker, the freckles are gone, and he’s initially too traumatized to speak, but he’s alive. His overjoyed family brings him home to a world of luxury and comfort he can barely remember. In time, they assure him, he’ll recover his memories; all that matters now is they’re together again. It’s perfect. A miracle. Except for one thing. He isn’t Daniel Tate. He’s a petty con artist who accidentally stumbled into the scam of a lifetime, and he soon learns he’s not the only one in the Tate household with something to hide. The family has as many secrets as they have millions in the bank, and one of them might be ready to kill to keep the worst one buried.

Jason Zhou survives in a divided society where the elite use their wealth to buy longer lives. The rich wear special suits that protect them from the pollution and viruses that plague the city, while those without suffer illness and early deaths. Frustrated by his city’s corruption and still grieving the loss of his mother, who died as a result of it, Zhou is determined to change things, no matter the cost. With the help of his friends, Zhou infiltrates the lives of the wealthy in hopes of destroying the international Jin Corporation from within. Jin Corp not only manufactures the special suits the rich rely on, but they may also be manufacturing the pollution that makes them necessary. Yet the deeper Zhou delves into this new world of excess and wealth, the more muddled his plans become. And against his better judgment, Zhou finds himself falling for Daiyu, the daughter of Jin Corp’s CEO. Can Zhou save his city without compromising who he is or destroying his own heart?

Years ago, Rachel had a crush on Henry Jones. The day before she moved away, she tucked a love letter into his favorite book in his family’s bookshop. She waited. But Henry never came. Now Rachel has returned to the city—and to the bookshop—to work alongside the boy she’d rather not see, if at all possible, for the rest of her life. But Rachel needs the distraction, and the escape. Her brother drowned months ago, and she can’t feel anything anymore. She can’t see her future. Henry’s future isn’t looking too promising, either. His girlfriend dumped him. The bookstore is slipping away. And his family is breaking apart. As Henry and Rachel work side by side—surrounded by books, watching love stories unfold, exchanging letters between the pages—they find hope in each other. Because life may be uncontrollable, even unbearable sometimes. But it’s possible that words, and love, and second chances are enough.

The next few books were all provided to me by Simon & Schuster Canada! I just wanted to quickly give them a little shout out as my summer thrillers are now all ready to go! I can’t wait to read these three books! 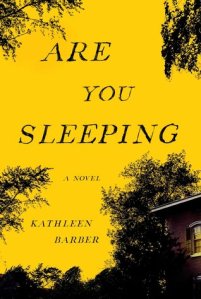 Are You Sleeping by Kathleen Barber

Josie Buhrman has spent the last ten years trying to escape her family’s reputation and with good reason. After her father’s murder thirteen years prior, her mother ran away to join a cult and her twin sister Lanie, once Josie’s closest friend and confidant, betrayed her in an unimaginable way. Now, Josie has finally put down roots in New York, settling into domestic life with her partner Caleb, and that’s where she intends to stay. The only problem is that she has lied to Caleb about every detail of her past—starting with her last name. When investigative reporter Poppy Parnell sets off a media firestorm with a mega-hit podcast that reopens the long-closed case of Josie’s father’s murder, Josie’s world begins to unravel. Meanwhile, the unexpected death of Josie’s long-absent mother forces her to return to her Midwestern hometown where she must confront the demons from her past—and the lies on which she has staked her future. 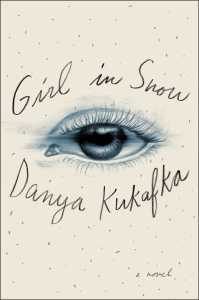 Girl In Snow by Danya Kukafka

When a beloved high schooler named Lucinda Hayes is found murdered, no one in her sleepy Colorado suburb is untouched—not the boy who loved her too much; not the girl who wanted her perfect life; not the officer assigned to investigate her murder. In the aftermath of the tragedy, these three indelible characters—Cameron, Jade, and Russ—must each confront their darkest secrets in an effort to find solace, the truth, or both. In crystalline prose, Danya Kukafka offers a brilliant exploration of identity and of the razor-sharp line between love and obsession, between watching and seeing, between truth and memory.

Felix and Tilda seem like the perfect couple: young and in love, a financier and a beautiful up-and-coming starlet. But behind their flawless facade, not everything is as it seems. Callie, Tilda’s unassuming twin, has watched her sister visibly shrink under Felix’s domineering love. She has looked on silently as Tilda stopped working, nearly stopped eating, and turned into a neat freak, with mugs wrapped in Saran Wrap and suspicious syringes hidden in the bathroom trash. She knows about Felix’s uncontrollable rages, and has seen the bruises on the white skin of her sister’s arms. Worried about the psychological hold that Felix seems to have over Tilda, Callie joins an Internet support group for victims of abuse and their friends. However, things spiral out of control and she starts to doubt her own judgment when one of her new acquaintances is killed by an abusive man. And then suddenly Felix dies–or was he murdered?

Every month, a few of the Toronto book bloggers try to meet up and discuss the books we have been reading lately! This is also the perfect opportunity to pass along books that you’re done with! I got three new books to read thanks to some lovely blogger friends and I can’t wait to dive on in!

The Love Interest by Cale Dietrich

There is a secret organization that cultivates teenage spies. The agents are called Love Interests because getting close to people destined for great power means getting valuable secrets. Caden is a Nice: the boy next door, sculpted to physical perfection. Dylan is a Bad: the brooding, dark-souled guy who is dangerously handsome. The girl they are competing for is important to the organization, and each boy will pursue her. Will she choose the Nice or the Bad? Both Caden and Dylan are living in the outside world for the first time. They are well-trained and at the top of their games. They have to be—whoever the girl doesn’t choose will die. What the boys don’t expect are feelings that are outside of their training. Feelings that could kill them both.

To Catch A Killer by Sheryl Scarborough

Erin Blake has one of those names. A name that, like Natalee Holloway or Elizabeth Smart, is inextricably linked to a grisly crime. As a toddler, Erin survived for three days alongside the corpse of her murdered mother, and the case—which remains unsolved—fascinated a nation. Her father’s identity unknown, Erin was taken in by her mother’s best friend and has become a relatively normal teen in spite of the looming questions about her past. Fourteen years later, Erin is once again at the center of a brutal homicide when she finds the body of her biology teacher. When questioned by the police, Erin tells almost the whole truth, but never voices her suspicions that her mother’s killer has struck again in order to protect the casework she’s secretly doing on her own. Inspired by her uncle, an FBI agent, Erin has ramped up her forensic hobby into a full-blown cold-case investigation. This new murder makes her certain she’s close to the truth, but when all the evidence starts to point the authorities straight to Erin, she turns to her longtime crush (and fellow suspect) Journey Michaels to help her crack the case before it’s too late.

Dimple Shah has it all figured out. With graduation behind her, she’s more than ready for a break from her family, from Mamma’s inexplicable obsession with her finding the “Ideal Indian Husband.” Ugh. Dimple knows they must respect her principles on some level, though. If they truly believed she needed a husband right now, they wouldn’t have paid for her to attend a summer program for aspiring web developers…right? Rishi Patel is a hopeless romantic. So when his parents tell him that his future wife will be attending the same summer program as him—wherein he’ll have to woo her—he’s totally on board. Because as silly as it sounds to most people in his life, Rishi wants to be arranged, believes in the power of tradition, stability, and being a part of something much bigger than himself. The Shahs and Patels didn’t mean to start turning the wheels on this “suggested arrangement” so early in their children’s lives, but when they noticed them both gravitate toward the same summer program, they figured, Why not? Dimple and Rishi may think they have each other figured out. But when opposites clash, love works hard to prove itself in the most unexpected ways.

And there you have it! All of the books that I picked up during the month of June! I can’t wait to make a dent into this list! What did you pick up this month?