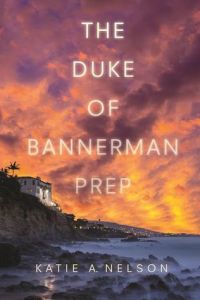 The Duke Of Bannerman Prep by Katie A. Nelson

Tanner McKay is at Bannerman Prep for only one reason: the elite school recruited him after he brought his public school’s debate team to victory last year. Bannerman wants a championship win. Debate is Tanner’s life—his ticket out of his poor-as-dirt life and family drama, straight to a scholarship to Stanford and the start of a new, better future.

But when he’s paired with the Duke, his plans for an easy ride seem as if they’ve hit the rails. The Duke is the quintessential playboy, beloved by everyone for his laissez-faire attitude, crazy parties, and seemingly effortless favors.

And a total no-show when it comes to putting in the work to win.

But as Tanner gets sucked into the Duke’s flashy world, the thrill of the high life and the adrenaline of existing on the edge becomes addictive. A small favor here and there seems like nothing in exchange for getting everything he ever dreamed of.

But the Duke’s castle is built on shady, shaky secrets, and the walls are about to topple down.

A contemporary retelling of The Great Gatsby, Katie Nelson’s taut debut is perfect for fans of John Green’s Looking for Alaska, Kate Brian’s Private series, and anyone who’s encountered the cut-throat world of competitive high school.

One thought on “#WaitingOnWednesday: The Duke Of Bannerman Prep by Katie A. Nelson”