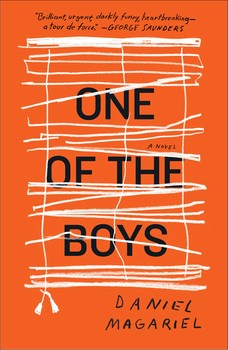 One Of The Boys

*Disclaimer: An ARC of One Of The Boys by Daniel Magariel was provided to me by Simon & Schuster Canada in exchange for an honest review. This does not effect my opinion in any way.

One Of The Boys is one of those books that punches you right in the face. It puts things into perspective as it explores the lives of two young brothers as they struggle with their unfortunate family situation. While One Of The Boys was a quick read, it was truly memorable and heart-wrenching.

The three of them—a twelve-year-old boy, his older brother, their father—have won the war: the father’s term for his bitter divorce and custody battle. They leave their Kansas home and drive through the night to Albuquerque, eager to begin again, united by the thrilling possibility of carving out a new life together. The boys go to school, join basketball teams, make friends. Meanwhile their father works from home, smoking cheap cigars to hide another smell. But soon the little missteps—the dead-eyed absentmindedness, the late night noises, the comings and goings of increasingly odd characters—become sinister, and the boys find themselves watching their father change, grow erratic, then violent. Set in the sublimely stark landscape of suburban New Mexico and a cramped apartment shut tight to the world, One of the Boys conveys with stunning prose and chilling clarity a young boy’s struggle to hold onto the dangerous pieces of his shattered family. Harrowing and beautiful, Daniel Magariel’s masterful debut is a story of survival: two foxhole-weary brothers banding together to protect each other from the father they once trusted, but no longer recognize. With the emotional core of A Little Life and the compact power of We the Animals, One of the Boys is among the most moving and remarkable debut novels you’ll ever read.

Quick and fast paced. I’m sure I could have read this book in one sitting if I was able to devote the time to doing so. It was super quick and fast paced, not only in physical page length but also in the way that the story was told. There was never a dull or quiet moment throughout the entire book.

The harsh reality. Not all families are perfect. I love how raw One Of The Boys was. It explored a family dynamic that is probably more common than we think, but that we never really read about too often. It really puts things into perspective, that there are real life children that are living through situations like those found throughout this book.

The family dynamic. While the situation these kids are going through is absolutely terrible, One Of The Boys explores that maybe these kids don’t see their situation the same way that those outside of the family see it. These kids grew up believing that their father was their hero. He convinced them that he was. They couldn’t see that what he was doing was terrible. They were brainwashed. It was interesting as a reader to look in on this family and to learn why and how people in terrible relationships or family situations don’t realize it.

Lost in the time jumps. There were moments throughout the novel that flashed back to earlier moments in the boys’ lives, but the transitions into these stories were very abrupt. There were a few times when I had to back track for a second to see if I had missed something before it clicked that we were learning about a past memory that they boys had. While I enjoyed learning about their past, I wish there was a better distinction between past and present.

More detail? As mentioned, I loved how fast paced this story was. However, there were times that I wished for just a little more detail. I’m not sure exactly how to describe it, but overall it just felt like there was a little something that was missing.

Overall, One Of The Boys will definitely be a story that I remember for a long time. It was quick and raw, but also dark and eye-opening. I’m eager to read whatever Daniel Magariel releases next!

Daniel Magariel is a fiction writer from Kansas City. He has a BA from Columbia University, as well as an MFA from Syracuse University, where he was a Cornelia Carhart Fellow. He has lived in Kansas, Missouri, New Mexico, Florida, Colorado, and Hawaii. He currently lives in New York with his wife. One of the Boys is his first novel.

2 thoughts on “#Review: One Of The Boys by Daniel Magariel”