It’s time for another Top 10 Tuesday!!! For those of you who don’t know, Top 10 Tuesday is a weekly meme hosted by the folks over at The Broke and the Bookish! This week, we’re compiling a list of books that will be released during the first half of 2017 (January – June) that we are the most excited about! It was really hard for me to narrow this list down to just 10 books as there are SO MANY amazing releases coming next year. After much decision making, here are my top 10 early 2017 releases that I am the most excited about! 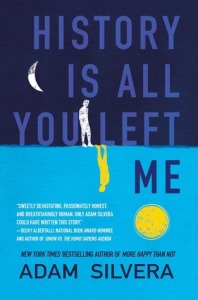 History Is All You Left Me by Adam Silvera

When Griffin’s first love and ex-boyfriend, Theo, dies in a drowning accident, his universe implodes. Even though Theo had moved to California for college and started seeing Jackson, Griffin never doubted Theo would come back to him when the time was right. But now, the future he’s been imagining for himself has gone far off course. To make things worse, the only person who truly understands his heartache is Jackson. But no matter how much they open up to each other, Griffin’s downward spiral continues. He’s losing himself in his obsessive compulsions and destructive choices, and the secrets he’s been keeping are tearing him apart. If Griffin is ever to rebuild his future, he must first confront his history, every last heartbreaking piece in the puzzle of his life. 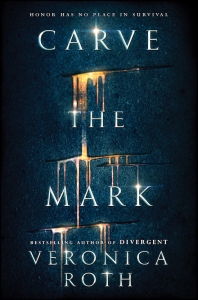 Carve The Mark by Veronica Roth

On a planet where violence and vengeance rule, in a galaxy where some are favored by fate, everyone develops a currentgift, a unique power meant to shape the future. While most benefit from their currentgifts, Akos and Cyra do not — their gifts make them vulnerable to others’ control. Can they reclaim their gifts, their fates, and their lives, and reset the balance of power in this world? Cyra is the sister of the brutal tyrant who rules the Shotet people. Cyra’s currentgift gives her pain and power — something her brother exploits, using her to torture his enemies. But Cyra is much more than just a blade in her brother’s hand: she is resilient, quick on her feet, and smarter than he knows. Akos is from the peace-loving nation of Thuve, and his loyalty to his family is limitless. Though protected by his unusual currentgift, once Akos and his brother are captured by enemy Shotet soldiers, Akos is desperate to get his brother out alive — no matter what the cost. When Akos is thrust into Cyra’s world, the enmity between their countries and families seems insurmountable. They must decide to help each other to survive — or to destroy one another. 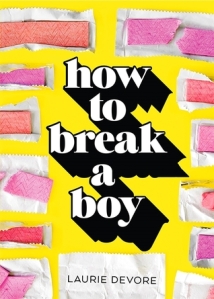 How To Break A Boy by Laurie Devore

Keep your enemies close, but your friends closer. Olivia Clayton has mastered the art of tearing others down to stay on top. She and her best friend, Adrienne, rule their small southern town like all good mean girls do–through intimidation and manipulation. After Olivia suffers a family tragedy and catches Adrienne sleeping with her boyfriend, Olivia is over it. She decides to make a change–but it’s impossible to resist taking Adrienne down one last time. Up to her old tricks, Olivia convinces golden boy Whit DuRant to be her SAT tutor and her fake boyfriend. But when it starts to feel real, Whit gets caught up in Olivia and Adrienne’s war. Olivia may ruin everything she touches, but this time she won’t go down without a fight–not if it means losing Whit. And definitely not if it means losing what’s left of herself. 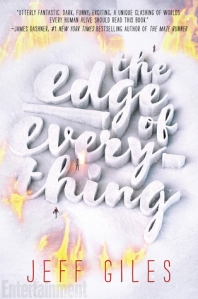 The Edge of Everything by Jeff Giles

It’s been a shattering year for seventeen-year-old Zoe, who’s still reeling from her father’s shockingly sudden death in a caving accident and her neighbors’ mysterious disappearance from their own home. Then on a terrifying sub-zero, blizzardy night in Montana, she and her brother are brutally attacked in a cabin in the woods–only to be rescued by a mysterious bounty hunter they call X. X is no ordinary bounty hunter. He is from a hell called the Lowlands, sent to claim the soul of Zoe’s evil attacker and others like him. Forbidden to reveal himself to anyone other than his victims, X casts aside the Lowlands’ rules for Zoe. As X and Zoe learn more about their different worlds, they begin to question the past, their fate, and their future. But escaping the Lowlands and the ties that bind X might mean the ultimate sacrifice for both of them. 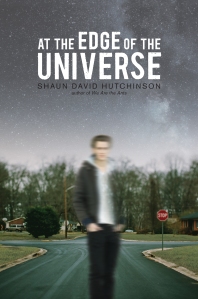 At The Edge Of The Universe by Shaun David Hutchinson

Tommy and Ozzie have been best friends since second grade, and boyfriends since eighth. They spent countless days dreaming of escaping their small town—and then Tommy vanished. More accurately, he ceased to exist, erased from the minds and memories of everyone who knew him. Everyone excerpt Ozzie. Ozzie doesn’t know how to navigate life without Tommy, and soon suspects that something else is going on: that the universe is shrinking. When Ozzie is paired up with new student Calvin on a physics project, he begins to wonder if Calvin could somehow be involved. But the more time they spend together, the harder it is for him to deny the feelings developing between them, even if he still loves Tommy. But Ozzie knows there isn’t much time left to find Tommy–that once the door closes, it can’t be opened again. And he’s determined to keep it open as long as possible. 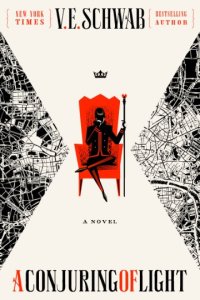 A Conjuring Of Light by V.E. Schwab

London’s fall and kingdoms rise while darkness sweeps the Maresh Empire—and the fraught balance of magic blossoms into dangerous territory while heroes and foes struggle alike. The direct sequel to A Gathering of Shadows, and the final book in the Shades of Magic epic fantasy series, A Conjuring of Light sees Schwab reach a thrilling culmination concerning the fate of beloved protagonists—and old enemies. 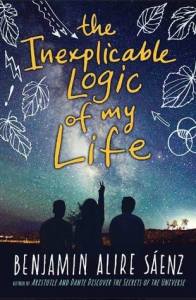 The Inexplicable Logic of my Life by Benjamin Alire Saenz

From the multi-award-winning author of Aristotle and Dante Discover the Secrets of the Universe comes a gorgeous new story about love, identity, and families lost and found. Sal used to know his place with his adoptive gay father, their loving Mexican-American family, and his best friend, Samantha. But it’s senior year, and suddenly Sal is throwing punches, questioning everything, and realizing he no longer knows himself. If Sal’s not who he thought he was, who is he?  This humor-infused, warmly humane look at universal questions of belonging is a triumph. 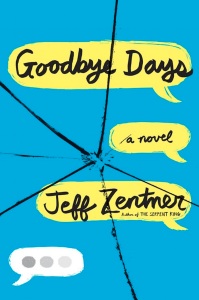 Carver Briggs never thought a simple text would cause a fatal crash, killing his three best friends, Mars, Eli, and Blake. Now Carver can’t stop blaming himself for the accident and even worse, there could be a criminal investigation into the deaths. Then Blake’s grandmother asks Carver to remember her grandson with a ‘goodbye day’ together. Carver has his misgivings, but he starts to help the families of his lost friends grieve with their own memorial days, along with Eli’s bereaved girlfriend Jesmyn. But not everyone is willing to forgive. Carver’s own despair and guilt threatens to pull him under into panic and anxiety as he faces punishment for his terrible mistake. Can the goodbye days really help? 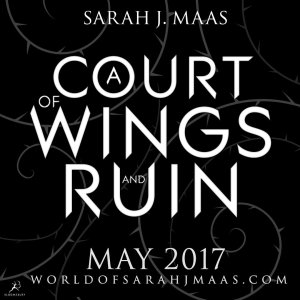 A Court of Wings and Ruin by Sarah J. Maas

Looming war threatens all Feyre holds dear in the third volume of the #1 New York Times bestselling A Court of Thorns and Roses series.Feyre has returned to the Spring Court, determined to gather information on Tamlin’s maneuverings and the invading king threatening to bring Prythian to its knees. But to do so she must play a deadly game of deceit-and one slip may spell doom not only for Feyre, but for her world as well. As war bears down upon them all, Feyre must decide who to trust amongst the dazzling and lethal High Lords-and hunt for allies in unexpected places. 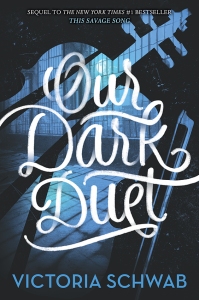 Our Dark Duet by Victoria Schwab

Kate Harker is a girl who isn’t afraid of the dark. She’s a girl who hunts monsters. And she’s good at it. August Flynn is a monster who can never be human, no matter how much he once yearned for it. He’s a monster with a part to play. And he will play it, no matter the cost. Nearly six months after Kate and August were first thrown together, the war between the monsters and the humans is terrifying reality. In Verity, August has become the leader he never wished to be, and in Prosperity, Kate has become the ruthless hunter she knew she could be. When a new monster emerges from the shadows—one who feeds on chaos and brings out its victim’s inner demons—it lures Kate home, where she finds more than she bargained for. She’ll face a monster she thought she killed, a boy she thought she knew, and a demon all her own.

What books are you the most excited about? Have I missed anything I should know about!?