Guys! I actually succeded in buying a very minimal amount of books this month! Are you proud of me?  I’m proud of me! Check out the books I picked up this month!

As a child, Calvin felt an affinity with the comic book character from Bill Watterson’s Calvin & Hobbes. He was born on the day the last strip was published; his grandpa left a stuffed tiger named Hobbes in his crib; and he even had a best friend named Susie. Then Calvin’s mom washed Hobbes to death, Susie grew up beautiful and stopped talking to him, and Calvin pretty much forgot about the strip—until now. Now he is seventeen years old and has been diagnosed with schizophrenia. Hobbes is back, as a delusion, and Calvin can’t control him. Calvin decides that Watterson is the key to everything—if he would just make one more comic strip, but without Hobbes, Calvin would be cured. Calvin and Susie (is she real?) and Hobbes (he can’t be real, can he?) set out on a dangerous trek across frozen Lake Erie to track down Watterson.

In the near future, scientists create what may be a new form of life: an artificial human named Charlotte. All goes well until Charlotte escapes, transfers her consciousness to the Internet, and begins terrorizing the American public. Charlotte’s attacks have everyone on high alert—everyone except Lee Fisher, the closeted son of the US president. Lee has other things to worry about, like keeping his Secret Service detail from finding out about his crush on Nico, the eccentric, Shakespeare-obsessed new boy at school. And keeping Nico from finding out about his recent suicide attempt. And keeping himself from freaking out about all his secrets. But when the attacks start happening at his school, Lee realizes he’s Charlotte’s next target. Even worse, Nico may be part of Charlotte’s plan too. As Lee races to save himself, uncover Charlotte’s plan, and figure out if he can trust Nico, he comes to a whole new understanding of what it means to be alive … and what makes life worth living.

Abby and Gretchen have been best friends since fifth grade, when they bonded over a shared love of E.T., roller-skating parties, and scratch-and-sniff stickers. But when they arrive at high school, things change. Gretchen begins to act…different. And as the strange coincidences and bizarre behavior start to pile up, Abby realizes there’s only one possible explanation: Gretchen, her favorite person in the world, has a demon living inside her. And Abby is not about to let anyone or anything come between her and her best friend. With help from some unlikely allies, Abby embarks on a quest to save Gretchen. But is their friendship powerful enough to beat the devil? 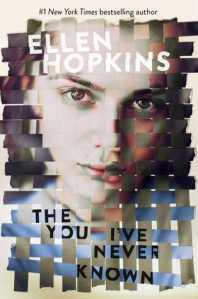 The You I’ve Never Known by Ellen Hopkins

How do you live your life if your past is based on a lie? A new novel in both verse and prose from #1 New York Times bestselling author, Ellen Hopkins. Arielle’s life is a blur of new apartments, new schools, and new faces. Since her mother abandoned the family, Arielle has lived nomadically with her father as he moves from job to job. All she’s ever wanted is to stay in one place for an entire school year, and it looks like she might finally get her wish. With a real friend, Monica, who might be even more than a friend soon, things are starting to look up. But Arielle’s life is upended—and not by her father, but by her mom, who reveals that she never left Arielle. Instead, Arielle’s father kidnapped her, and her mom has been left searching ever since. She wants to take Arielle away, but Arielle has no connection with her mother, and despite everything, still loves her father. How can she choose between the mother she’s been taught to mistrust and the father who sewed that suspicion?