*I was offered an ARC of Boy Robot by Simon Curtis from Simon & Schuster Canada in exchange for an honest review.*

Boy Robot has been on my watch list for a while now. I had first heard about it a while back when a few other book blogger friends of mine had been discussing it. I was then offered the opportunity to read an advanced copy thanks to the lovely people over at Simon & Schuster Canada! I was way to excited when I found it in my mailbox and I absolutely could not wait to dive in. Boy Robot turned out to be more than I expected. I didn’t really want to know much about it before starting it and I’m glad that I decided to go in blind.

Seventeen-year-old Isaak discovers the truth about his origin and the underground forces that must come together to fight against a secret government organization formed to eradicate those like him in this high-octane science fiction debut. There once was a boy who was made, not created. In a single night, Isaak’s life changed forever. His adoptive parents were killed, a mysterious girl saved him from a team of soldiers, and he learned of his own dark and destructive origin. An origin he doesn’t want to believe, but one he cannot deny. Isaak is a Robot: a government-made synthetic human, produced as a weapon and now hunted, marked for termination. He and the Robots can only find asylum with the Underground—a secret network of Robots and humans working together to ensure a coexistent future. To be protected by the Underground, Isaak will have to make it there first. But with a deadly military force tasked to find him at any cost, his odds are less than favorable. Now Isaak must decide whether to hold on to his humanity and face possible death…or to embrace his true nature in order to survive, at the risk of becoming the weapon he was made to be.

The characters. Isaak is a sweetheart. I just want to hug him and tell him everything is going to be okay. It makes me sad knowing that he so harshly judges himself and questions his humanity…or lack thereof. We also meet some other fantastic characters that are there to help Isaak on his journey of self-discovery. There’s Azure, Kamea & JB who are all members of a secret organization that try to save each new manifested robot. While I wish we could have learned more about each of them, I’m sure we will in the future upcoming novels.

The vignettes. In between each chapter featuring Isaak, we see little snapshots of the lives of other robots through quick little vignettes. These were probably my favourite part of the entire novel. They showcase the struggle that each robot goes through as they discover what they are and the impact that it has on their family life. Some of these vignettes were so dark and pretty hard to read, but they were effective in really making you feel for these robots.

The deeper meaning. One of the biggest discussions throughout this novel is about humanity. What makes someone human? Is it biology? Is it the way that they think? These robots grew up living as humans, unaware of what they were until the age of 18. As they manifest they begin to question whether or not they are human. They have special abilities and other qualities that differ from humans, but they still have thoughts and emotions. I loved the deeper meaning within Boy Robot.

The length. There were moments that just felt a little too dragged out. There were a few scenes that felt a little redundant and similar to other situations that happened throughout the book. I kind of wish a few of these were cut out.

Overall, I really enjoyed reading Boy Robot by Simon Curtis! It was different from what I expected in the best way possible! I still have a lot of questions and there was a bit of a cliffhanger, but I’m super eager to continue on with this series as the new books are released! 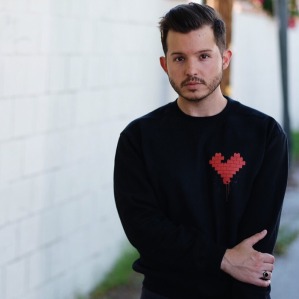 Simon Curtis was born in Michigan and raised in Tulsa, Oklahoma. He was diagnosed with leukemia at age ten and began performing in musical theater and opera that same year. He was the happiest bald, chemotherapy-addled cancer patient ever seen on the stage. At eighteen, he moved to Los Angeles. After various roles on Nickelodeon and Disney Channel, Simon left acting to pursue music, releasing his first album, 8bit Heart, as a free download, followed by his second album, RA, which landed at number twenty on Billboard’s Dance & Electronic Albums chart. Simon continues to write and release music as an independent recording artist, and he looks forward to his new chapter as an author. Above all else, he strives to inspire hope in young people.