On Sunday October 23rd, the Chapters location in Brampton was lucky enough to have Catherine Egan, Kiersten White, Marie Lu & Morgan Rhodes stop by to quickly discuss their newest novels and answer any questions that the audience had!

These four women are successful and well known authors, which made the event title “The Lady Is A Champ” the perfect choice. Each of them took time to talk to the audience and answer any burning questions that we had! I only had books by Morgan Rhodes, but after hearing each of them speak, I’m really curious about each of their novels! I know, I know…I definitely should have read something by each of them by now!

Keep reading to find out more about each of these wonderful books and the authors that wrote them!

Fun Tweets From Throughout The Evening

More About The Books!

Julia has the unusual ability to be . . . unseen. Not invisible, exactly. Just beyond most people’s senses.

It’s a dangerous trait in a city that has banned all forms of magic and drowns witches in public Cleansings. But it’s a useful trait for a thief and a spy. And Julia has learned–crime pays.

Her latest job is paying very well indeed. Julia is posing as a housemaid in the grand house of Mrs. Och, where an odd assortment of characters live and work: A disgraced professor who sends her to fetch parcels containing bullets, spiders, and poison. An aristocratic houseguest who is locked in the basement each night. And a mysterious young woman who is clearly in hiding–though from what or whom?

Worse, Julia suspects that there’s a connection between these people and the killer leaving a trail of bodies across the frozen city.

The more she learns, the more she wants to be done with this unnatural job. To go back to the safety of her friends and fellow thieves. But Julia is entangled in a struggle between forces more powerful than she’d ever imagined. Escape will come at a terrible price.

And I Darken by Kiersten White

No one expects a princess to be brutal. And Lada Dragwlya likes it that way. Ever since she and her gentle younger brother, Radu, were wrenched from their homeland of Wallachia and abandoned by their father to be raised in the Ottoman courts, Lada has known that being ruthless is the key to survival. She and Radu are doomed to act as pawns in a vicious game, an unseen sword hovering over their every move. For the lineage that makes them special also makes them targets.

Lada despises the Ottomans and bides her time, planning her vengeance for the day when she can return to Wallachia and claim her birthright. Radu longs only for a place where he feels safe. And when they meet Mehmed, the defiant and lonely son of the sultan, Radu feels that he’s made a true friend—and Lada wonders if she’s finally found someone worthy of her passion.

But Mehmed is heir to the very empire that Lada has sworn to fight against—and that Radu now considers home. Together, Lada, Radu, and Mehmed form a toxic triangle that strains the bonds of love and loyalty to the breaking point.

The Midnight Star by Marie Lu

There was once a time when darkness shrouded the world, and the darkness had a queen.

Adelina Amouteru is done suffering. She’s turned her back on those who have betrayed her and achieved the ultimate revenge: victory. Her reign as the White Wolf has been a triumphant one, but with each conquest her cruelty only grows. The darkness within her has begun to spiral out of control, threatening to destroy all that she’s achieved.

Adelina’s forced to revisit old wounds when a new danger appears, putting not only Adelina at risk, but every Elite and the very world they live in. In order to save herself and preserve her empire, Adelina and her Roses must join the Daggers on a perilous quest—though this uneasy alliance may prove to be the real danger.

The Darkest Magic by Morgan Rhodes 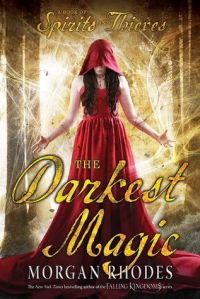 Modern-day Toronto: Sisters Crystal and Becca Hatcher are reunited after reclaiming the Bronze Codex and narrowly escaping death. They have no one to trust but each other, and the only thing keeping them safe is the book that sent Becca’s spirit to Ancient Mytica–the same book that their enemies would kill them for.

Ancient Mytica: Maddox grapples to keep his newly discovered powers under control, while the ruthless goddess Valoria hunts him down.

Modern-day Toronto: Farrell embraces his dark side as he unwittingly falls further under the spell of Markus, the mastermind leader of the nefarious Hawkspear Society, who will stop at nothing to find Crys and Becca–and the remarkable book in their possession.

This was yet another succesful event held by Chapters/Indigo/Coles and we definitely all had an amazing time! I can’t wait for the next one!