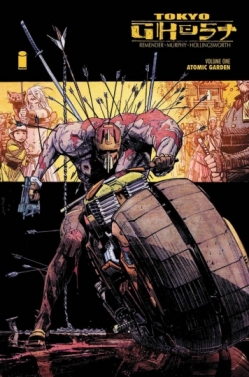 “We eat together. No one distracted by phones, no one politicking for money or stature. No loud egos. No one more important than anyone else…how sweet the simplicity is.”

The Isles of Los Angeles 2089: humanity is addicted to technology. Getting a virtual buzz is the only thing left to live for, and gangsters run it all. Who do these gangsters turn to when they need their rule enforced? Constables Led Dent and Debbie Decay are about to be given a job that will force them out of the familiar squalor of LA and into the last tech-less country on Earth: The Garden Nation of Tokyo.

I grabbed this first volume of Tokyo Ghost on a whim while attending Fan Expo Canada at the end of the summer. I had heard of it previously because (if you don’t know this yet, where have you been?) Deadly Class, also written by Rick Remender, happens to be my favourite comic series of all time. While exploring the other works of Remender, I came across Tokyo Ghost and knew I needed to pick it up as soon as I could. Well, I finally did…and even though it took me forever to finally read it, I’m super glad that I did.

The writing. Rick Remender just never disappoints. The first time I read anything by him was Deadly Class, and the writing was so instantly relatable, it hooked me right in. It was no different with Tokyo Ghost. The writing is phenomenal and I absolutely fell in love with it.

The art. Tokyo Ghost contains some of the most intricate and detailed artwork I have ever seen. Not only is the art style beautiful in itself, but the colouring is unlike anything I’ve seen in a comic before. There were moments where it may have felt a little too busy, but for the most part, Tokyo Ghost is visually stunning.

The creative storyline. I mean, how unique is this. A futuristic setting in which the drug of choice is technology. Honestly, this doesn’t seem very far off from a possible future reality.

The characters. I won’t lie, at first I wasn’t really connecting with either Debbie or Led, but then we got to learn more about their back stories. That’s when I fell in love. Their story is just perfect and I was not expecting that at all from this comic. Not only were our two main characters fantastic, but we also got to meet quite a few memorable side characters.

The slow start. It took a little while before I really started feeling the story and the characters. Tokyo Ghost starts with a very action packed scene and it took me a while to understand everything that was happening. I’m glad I stuck with it though, because things definitely got interesting.

While Tokyo Ghost was slow to start, and maybe slightly confusing at first, it definitely picks up and is just as action packed, well written and beautiful as I expected. I have already ordered volume two because Rick Remender is the master of the cliffhanger.

Rick Remender is the writer/co-creator of comics such as LOW, Fear Agent, Deadly Class, Tokyo Ghost, and Black Science. For Marvel he has written titles such as Uncanny Avengers, Captain America, Uncanny X-Force, and Venom.

He’s written video games such as Bulletstorm and Dead Space, worked on films such as The Iron Giant, Anastasia, and Titan A.E.

Sean Murphy was born in Nashua, NH in the fall of 1980. He got interested in comics in grade school and spent many afternoons of his childhood drawing instead of making friends. His formal education started in Salem, NH as an apprentice to Leslie Swank, local painter, cartoonist and WWII vet. After graduating Pinkerton Academy high school in 1999 he attended Massachusetts College of Art (Boston) and then the Savannah College of Art and Design.

Before graduation, Sean was already working with such publishers as Dark Horse on their Star Wars titles. After getting his BFA, he moved out to Hollywood to pursue concept art for video games and film making while paying the bills with additional titles like Star Trek, Teen Titans, and Batman/Scarecrow: Year One.

His first creator owned book “Off Road” was released by Oni in 2005 and won an American Library Association award. Soon after, Sean signed an exclusive contract with DC Comics and moved to New York. His DC published work is what he’s most known for currently–Hellblazer: City of Angels, Joe the Barbarian and American Vampire: Survival of the Fittest helped boost his career greatly. His latest book for DC/Vertigo, and creator owned mini series called “Punk Rock Jesus”, in stores now.

Sean lives in Brooklyn with his wife Colleen, and their two dogs, Red and Bebop.

Hollingsworth graduated from The Kubert School in 1991 and began getting regular work from Marvel Comics and DC Comics. In 1993, he was hired to the Dark Horse Comics staff as head of the painted art department. After a year, he returned to freelance work and helped launch the award-winning Preacher from DC’s Vertigo imprint.

He has worked on many titles for DC/Vertigo, Marvel, and others, including Catwoman, Batman, Daredevil and Alias. He won an Eisner Award for Best Colorist/Coloring in 1997, for work on several comics including Death: The High Cost of Living. He was nominated in 2004 for Catwoman. In 2006, he provided the colors of the Eternals book written by Neil Gaiman and pencilled by John Romita, Jr. Hollingsworth signed an exclusive contract with Marvel in April 2010.[1] In 2012, he teamed-up with writer Matt Fraction and artist David Aja to publish a new ongoing series of the character Hawkeye.[2]

In 2003, he enrolled in the Gnomon School of Visual Effects in Hollywood to become a visual effects artist in the film industry. He began working as a texture painter and technical director on such films as Sky Captain and the World of Tomorrow, Fantastic Four, Serenity, Superman Returns, among others.

Toward the end of 2006, Hollingsworth moved to Croatia, where he lives with his wife, Branka, and son, Liam. 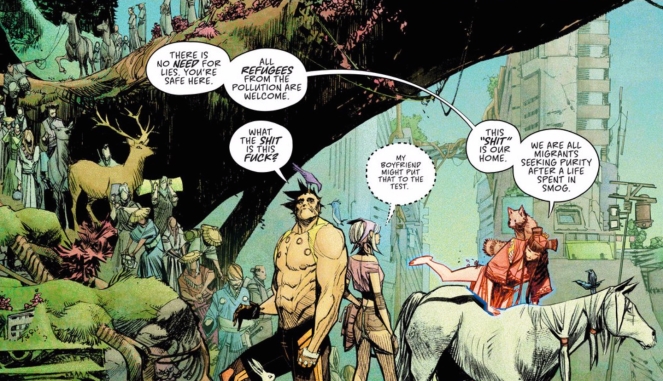