Holding The Man is a memoir written by Timothy Conigrave about growing up and living as a gay man in the 1970s and 1980s in Australia. Tim realizes he is gay at a young age and the novel begins with his self discovery and experimentation with a few different boys, until he meets John Caleo. John is the captain of the high school football team and what at first seems like an unlikely relationship, becomes one of the most heartbreaking stories I have ever read. We get to experience their relationship and all of the ups and downs that they had to overcome together. Whether it was coming out to their parents and friends or dealing with the HIV and AIDS pandemic of the 1980s, Holding The Man felt so real and personal and it is a true treasure of a novel.

The 1980s have always been a decade in which I wish I could have lived. Hell, even the 1970s would have been awesome to experience. However, there are times when I read books or watch movies that take place in this era and I realize how much we take today for granted. I didn’t grow up hearing about the AIDS pandemic on the news. It was something we learned about in school and through pop culture, but I never experienced the scare of this new virus going around and killing people without any real explanation or form of medication that could help. Reading Holding The Man helped me understand what that must have been like, how scary it must have been. To know that you were one hundred percent going to die if you got this disease, I just can’t even imagine how that must have felt.

Timothy Conigrave is such a phenomenal writer. He didn’t hold back a single detail, no matter how shocking, risqué or depressing it was. I think that’s probably part of what made this book feel so real, other than the fact that it is indeed a true story of course. Tim didn’t romanticize anything. He poured his heart and soul out into this memoire by telling his story exactly how it was. Was his relationship with John perfect? No. I watched the film adaptation of this novel, before realizing it even was even based on a true story/memoire, and I can tell you right now that the film definitely took some liberties. While it did explore Tim’s need to experiment, it didn’t nearly go into the level of detail that the novel had. Although Tim and John had their rough patches, these two were clearly soulmates. One could not live without the other. To be together for 15 years, even if it was off and on, definitely means something. They never left each others side and they were always there for one another when they needed love and support the most.

While I had no idea what I was getting myself into as I watched the film, I was well aware of what I was getting myself into as I read the book. I cried both times. Probably from shock while watching the film as I had no idea the direction that it was about to take, but probably from complete and utter sadness while reading the novel. Even though I knew what was coming, the book provided an entirely new level of detail and emotion that just got to me. Honestly, I think that this book would make anyone who reads cry. It’s completely devastating, but also extremely beautiful.

I absolutely loved everything about this book. I loved that we got to experience the relationship between Tim & John as they were growing up from high school students to adults. I loved that their relationship was far from perfect. I loved how truthful and raw the writing was. I loved learning about how each of the boys’ family and friends reacted to them as a gay couple and then again as they were both diagnosed with AIDS. This book was hands down one of the most beautiful novels and one of the most heartbreaking true stories I have ever read.

As mentioned, I absolutely loved EVERYTHING about this book. I wouldn’t change a single thing about it. Everyone needs to read this wonderful novel. I’m truly grateful that I was able to come across this beautiful true story. 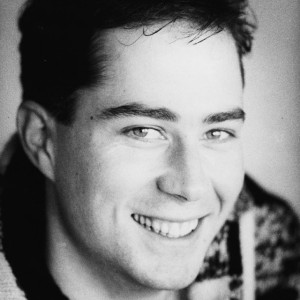 Timothy Conigrave was born in Melbourne in 1959 and educated at Xavier College and Monash University. He trained as an actor at the National Institute of Dramatic Art, graduating in 1984. He appeared in such plays as Brighton Beach Memoirs and As Is with The Fabulous Globos. He initiated the project Soft Targets, seen at Griffin Theatre in 1986. His other plays include Blitz Kids and Thieving Boy. Timothy Conigrave died in October 1994, shortly after completing his book Holding the Man.

9 thoughts on “#BookReview: Holding The Man by Timothy Conigrave”