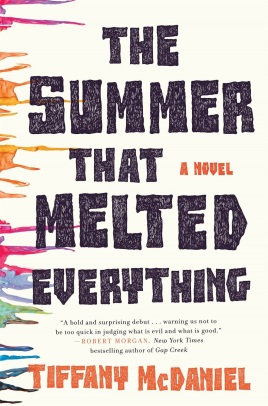 The Summer That Melted Everything

Firstly, I would like to thank the author, Tiffany McDaniel, for contacting me and providing me with an Advance Reader’s Copy in exchange for an honest review.

“Why, upon hearing the word devil, did I just imagine the monster? Why did I fail to see a lake? A flower growing by that lake? A mantis praying on the very top of a rock? A foolish mistake, it is, to expect the beast, because sometimes, sometimes, it is the flower’s turn to own the name.”

The Summer That Melted Everything is one of those books that just had me completely stunned after reading it. What started out as something that felt unique and quirky, quickly turned into something extremely dark and depressing. This story went places that I definitely did not see coming. I’m left in shock, especially after reading the final chapters.

The Summer That Melted Everything begins with an open letter, printed in the newspaper, inviting the Devil himself to visit the town of Breathed, Ohio. The Devil himself indeed shows up..in the form of a young 13 year old boy. As the Bliss family takes the boy in as one of their own, a slew of dark and unfortunate events surround the family and the rest of Breathed, all during the hottest heat wave the town has ever experienced.

“I know the sins of everyone who comes to hell. That’s part of my misery. To know and feel theirs.”

The Summer That Melted Everything takes place during the summer of 1984. I don’t know about you, but I have always wished that I could have been alive during the exciting decade that was the 1980’s. However, I keep reading books that take place in this decade that make me realize that maybe it wasn’t the most ideal decade to have grown up during. Drug abuse was at an all time high, an epidemic known as the HIV/AIDS virus had begun to spread and all of this formed into a decade of mass chaos. The Summer That Melted Everything was another one of those books that allowed me to realize that the 1980’s weren’t as amazing as they may seem in my mind.

The story opens with Fielding Bliss, an elderly man, telling the story about his past in the summer of 1984 and the endless amount of tragic events that plagued his family. I loved the back and forth in the story telling between Fielding as an older man and Fielding as a 13 year old boy in 1984. At first this shows the stark difference between who he was as a child and who he became as an older man. As the story continues, we begin to witness what could have happened to make this sweet caring boy become a bitter and depressed old man.

“I am not the ruler of hell. I am merely its first and most famous sufferer turned custodian with the key to the gate in my back pocket.”

I loved the unique take on the “devil” character depicted as a young teenaged boy. I’ve come across the devil as a character in many other forms of pop culture, but I can’t say that it has ever been described as a child before. Demons yes, but the actual devil himself? I don’t think so.

As the story progresses you begin to learn that there is a lot more going on. Everything starts to reveal itself and the novel unravels and we begin to learn the truth behind this mysterious young boy. Is he really the devil or is it just a coincidence that all of these terrible and tragic events are occurring during the one summer that he shows up?

“The more holes we dig, ladies and gentlemen of the jury, the less solid ground any of us will have to stand on.”

There are moments in this story that were completely heartbreaking and they all happened so quickly, one right after the other. There was one moment towards the end of the novel that had me completely shocked and feeling broken. I wasn’t expecting something like that to happen and it truly did upset me. The Summer That Melted Everything definitely contains its fair share of extremely dark and depressing themes. So many that I thought, “there can’t possibly be anything worse that could happen next.” Of course every time I thought that, something terrible was right around the corner.

The writing style of Tiffany McDaniel is amazing. The quotes I have highlighted throughout this interview don’t even begin to showcase the level of writing found throughout this novel. I found myself re-reading sentences so I could find the deeper meaning hidden behind them.

The Summer That Melted Everything truly is an amazing debut novel by author Tiffany McDaniel that will have you thinking about it long after you have finished reading. This novel made me go through some serious emotions and touched me in ways that I was not expecting.

16 thoughts on “Book Review: The Summer That Melted Everything by Tiffany McDaniel”