“Because it was denial — not remorse or mistakes — that ruled out second chances.”

Recently, I was asked by Simon & Schuster Canada if I would like to participate in their Summer Fiction Blog Tour. Of course I jumped at the chance! Relativity by Antonia Hayes was one of the novels that I was asked to read and review. I had heard nothing about this book before I was asked to read it, but the premise definitely grabbed my attention.

Relativity is a story told from three different perspectives about a family and their relationships with one another. Ethan Forsythe is a twelve year old boy that is very different from the average pre-teen. He is exceptionally smart and has an extreme knowledge of all things related to physics. Ethan lives with his single mother in Sydney, Australia, but as he continues to grow older, he begins wanting to learn more about his absent father. Claire is hesitant to re-introduce Ethan’s father, Mark, into his life, until one day Ethan falls ill due to a tragic event that took place in his past that may force Claire to contact Mark. Secrets begin to emerge from the shadows and the truth starts to become clear as to what exactly is happening with Ethan and how it is connected to his past.

I must say, Relativity was one hell of a pleasant surprise. Like I mentioned, I had never heard of this novel before becoming a part of Simon & Schuster’s Summer Fiction Blog Tour. I went into this story completely blind and I ended up really enjoying it.

One of the first things that I noticed when I began reading was how beautiful the writing style was. It was almost poetic. It had a really nice flow to it which made the transition from one perspective to the other blend together quite nicely. Each perspective, whether it was from Ethan, Claire or Mark, felt very different from one another, giving each of the characters their own individual voices.

I loved the story when it was being told from Ethan’s point of view. Sure, he is supposed to be an extremely smart person, but he is also supposed to be a twelve year old child. I think this was captured beautifully as he did say some pretty profound things, but he also still had the curiosity and naivety of a child.

However, I can’t say that I was a huge fan of Claire. Reading moments from her perspective kind of bothered me a little as she really couldn’t seem to make up her own mind. One moment she would have one thought and the next it would completely change. I understand why she would be this way, but for some reason, her behaviours did not jive with me personally.

I felt a little indifferent while reading from Mark’s perspective. For the most part it was okay, but I did really enjoy reading his parts when we reach the end of the novel. It dives more into his past and the truth behind the events that occurred providing a detailed backstory into their family and their story.

That being said, I’m not sure how I felt about the ending. To me, it felt like the story was leaning toward one explanation and then it decided to turn around and go the more obvious route. I was expecting something else from the ending, but maybe that was just me getting my hopes up.

I will say though, that Antonia Hayes did her research before writing this novel…or at least I think she did? I mean, I know nothing about physics, but this book was full of scientific talk that I definitely had a hard time understanding. I’m one hundred percent okay with that though. It was part of the beauty of the book. I didn’t need to understand all of the physics and scientific speak, but I believed that the characters knew what they were talking about. I believed that Ethan was an extremely smart twelve year old that had an extreme understanding of science.

As I mentioned, Relativity was a pleasant surprise for me. I had no idea whether or not I was going to enjoy it, and it ended up being one of those books that is genuinely hard to put down. Relativity is such a beautifully written story that I know will stay with me for a long time.

*Note: An ARC of Relativity by Antonia Hayes was provided by Simon & Schuster Canada as part of their Summer Fiction Blog Tour in exchange for an honest review.

Check out some upcoming dates on the Summer Fiction Blog Tour! #ReadChillRepeat 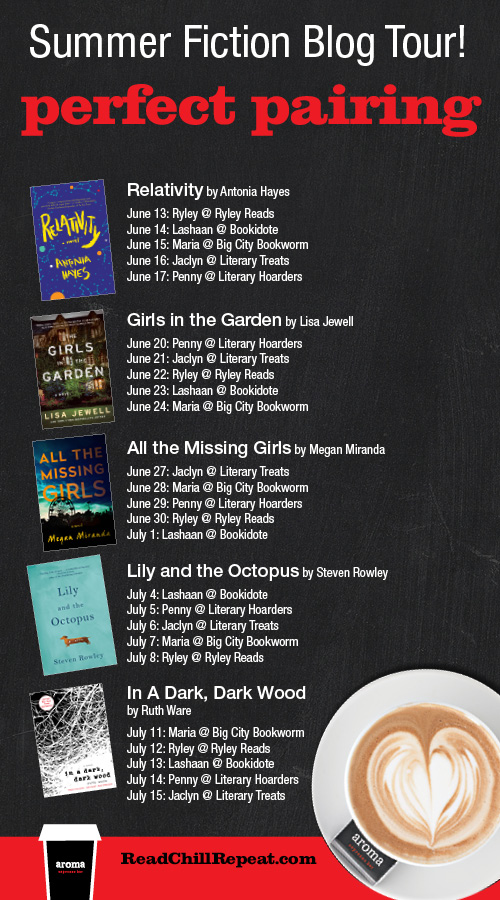