Back To The Future, Vol.1: Untold Tales
and Alternate Timelines

Firstly, I would like to thank NetGalley and the publisher for providing me with a copy in exchange for an honest review.

Those who know me well, know that I am a HUGE Back To The Future fan. Back when we got our first ever DVD player, my dad bought the trilogy on DVD during a Boxing Day sale. He sat the family down and we all watched Back To the Future, me for the first time ever. I have since lost count of how many times I have seen it and it remains to be my favourite film of all time.

My first reaction upon coming across a Back to the Future comic series was pure excitement. Then I thought about it for a little, and I started to worry. What if it doesn’t do the story justice? Maybe they should have just left it alone? I understand that what was once considered the “future” in Back To The Future Part Two recently became the past last year and a lot of hype started to resurface around the Back To Future trilogy. I was one of the many who celebrated with a Back To The Future marathon on October 21st 2015 and I am all for the hype, but when does it become too much? When does the hype start tainting what made the story so wonderful to begin with?

I was hesitant to start reading at first, but then I decided to just jump in quickly without thinking too much about it. I am happy to say that I actually really did like this story! Was it amazing? Did it have me at the edge of my seat? Did I devour it? No, but it was thoroughly entertaining and I quite enjoyed the time I spent reading it.

There were a lot of little moments that Back To The Future fans will definitely appreciate such as little nods to the original films that were really clever and well done. References like: needing roads and having more than one television per household were entertaining inside references that were added to this story.

I did like the way that this series filled in gaps between timelines within the films. It provided insights into what happened when Marty finally made it back to 1985. What did 1955 Doc do between 1955 and 1985 after he helped Marty get back? How did Marty & Doc even meet in the first place? This comic series fills in a whole bunch of gaps between the 1885, 1955, 1985 and 2015 timelines and it did so very creatively. It didn’t feel forced, it actually felt like these moments were genuinely what happened in between those time periods.

Although I wasn’t blown away, this comic series was thoroughly entertaining and I suggest every Back To The Future fan at least try giving this one a go! 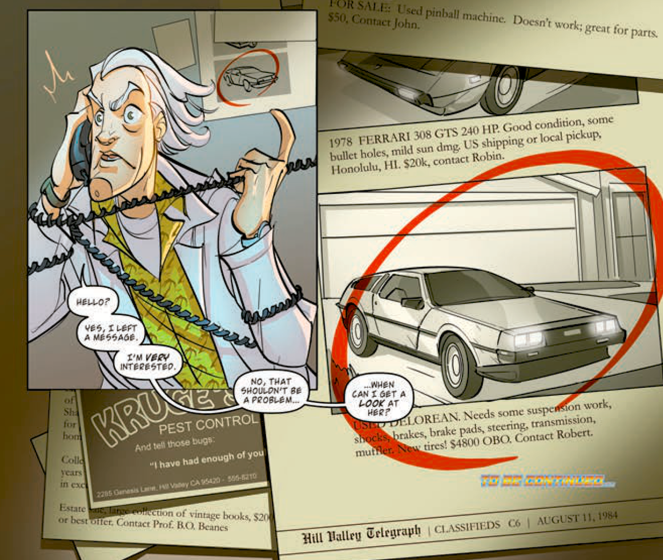