Would you look at that?! I’m bringing back a meme that I participated in once quite a while ago! Friday Finds is a meme hosted by A Daily Rhythm, where we showcase the books we recently found and added to our TBR. This doesn’t necessarily mean books that you’ve purchased, but rather books that you have recently discovered and would like to read sometime in the future!

Here are my finds for the week! 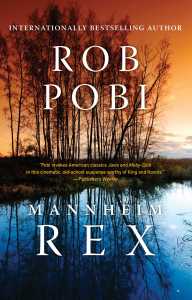 Goodreads Synopsis: Recently widowered and grieving, Gavin flees New York City for the quiet of the country. His new home on Lake Caldasac has surprisingly few visitors, and the author soon learns why: a suspiciously high number of people have gone missing in the small town. The deaths have all been ruled accidents, but Finn Horn, a handicapped boy obsessed with fishing, knows the truth. There’s a monster in the lake. And it wants to feed. Thirteen-year-old Finn, who is dying of cancer, has only one last wish: to go down in the record books for catching a real-life monster. Battling demons of his own, Gavin joins Finn on his perilous quest to slay the nightmarish leviathan.

The One and Only Ivan by Katherine Applegate

Goodreads Synopsis: Ivan is an easygoing gorilla. Living at the Exit 8 Big Top Mall and Video Arcade, he has grown accustomed to humans watching him through the glass walls of his domain. He rarely misses his life in the jungle. In fact, he hardly ever thinks about it at all. Instead, Ivan thinks about TV shows he’s seen and about his friends Stella, an elderly elephant, and Bob, a stray dog. But mostly Ivan thinks about art and how to capture the taste of a mango or the sound of leaves with color and a well-placed line. Then he meets Ruby, a baby elephant taken from her family, and she makes Ivan see their home—and his own art—through new eyes. When Ruby arrives, change comes with her, and it’s up to Ivan to make it a change for the better. 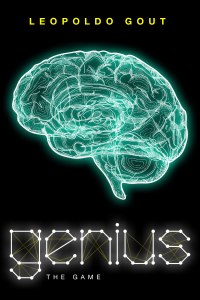 Genius: The Game by Leopoldo Gout

Goodreads Synopsis: The Game: Get ready for Zero Hour as 200 geniuses from around the world go head to head in a competition hand-devised by India’s youngest CEO and visionary. The Players: Rex: One of the best programmers/hackers in the world, this 16-year-old Mexican-American is determined to find his missing brother. Tunde: This 14-year-old self-taught engineering genius has drawn the attention of a ruthless military warlord by single-handedly bringing electricity and internet to his small Nigerian village.
Painted Wolf: One of China’s most respected activist bloggers, this mysterious 16-year-old is being pulled into the spotlight by her father’s new deal with a corrupt Chinese official.The Stakes: Are higher than you can imagine. Like life and death. Welcome to the revolution. And get ready to run.

The School For Good & Evil by Soman Chainani

Goodreads Synopsis: This year, best friends Sophie and Agatha are about to discover where all the lost children go: the fabled School for Good & Evil, where ordinary boys and girls are trained to be fairy tale heroes and villains. As the most beautiful girl in Gavaldon, Sophie has dreamed of being kidnapped into an enchanted world her whole life. With her pink dresses, glass slippers, and devotion to good deeds, she knows she’ll earn top marks at the School for Good and graduate a storybook princess. Meanwhile Agatha, with her shapeless black frocks, wicked pet cat, and dislike of nearly everyone, seems a natural fit for the School for Evil. But when the two girls are swept into the Endless Woods, they find their fortunes reversed—Sophie’s dumped in the School for Evil to take Uglification, Death Curses, and Henchmen Training, while Agatha finds herself in the School For Good, thrust amongst handsome princes and fair maidens for classes in Princess Etiquette and Animal Communication.. But what if the mistake is actually the first clue to discovering who Sophie and Agatha really are…? The School for Good & Evil is an epic journey into a dazzling new world, where the only way out of a fairy tale is to live through one.

Goodreads Synopsis: Leeds, late 1975 and a body has been found on Prince Philip Playing Fields. Ricky, teenage delivery van boy for Corona pop, will be late for The Matterhorn Man. In the years that follow until his capture, the Yorkshire Ripper and Rick’s own life draw ever closer with unforeseen consequences. Set in a time in England’s history of upheaval and change – both personal and social – this is a story told in an unforgettable voice. 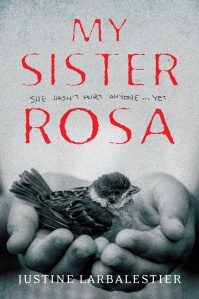 My Sister Rosa by Justine Larabalestier

Goodreads Synopsis: Che Taylor has four items on his list: 1. He wants to spar, not just train in the boxing gym. 2. He wants a girlfriend. 3. He wants to go home. 4. He wants to keep Rosa under control.Che’s little sister Rosa is smart, talented, pretty, and so good at deception that Che’s convinced she must be a psychopath. She hasn’t hurt anyone yet, but he’s certain it’s just a matter of time. And when their parents move them to New York City, Che longs to return to Sydney and his three best friends. But his first duty is to his sister Rosa, who is playing increasingly complex and disturbing games. Can he protect Rosa from the world – and the world from Rosa?

Goodreads Synopsis: Mike Tate is a normal dude. He and his friends have a crappy band (an excuse to drink cheap beer and rock out to the Lemonheads) and hang out in parking lots doing stupid board tricks. But when Mike’s girlfriend Lisa, who knows him better than he does, breaks up with him, he realizes he’s about to have a major epiphany that will blow his mind. And worse–he gets elected to homecoming court. It’s like the apocalypse came, only instead of nuclear bombs and zombies, Mike gets school participation, gay thoughts, and mother-effin’ cheerleaders. 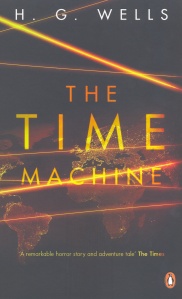 The Time Machine by H.G. Wells

Goodreads Synopsis: So begins the Time Traveller’s astonishing firsthand account of his journey 800,000 years beyond his own era—and the story that launched H.G. Wells’s successful career and earned him his reputation as the father of science fiction. With a speculative leap that still fires the imagination, Wells sends his brave explorer to face a future burdened with our greatest hopes…and our darkest fears. A pull of the Time Machine’s lever propels him to the age of a slowly dying Earth.  There he discovers two bizarre races—the ethereal Eloi and the subterranean Morlocks—who not only symbolize the duality of human nature, but offer a terrifying portrait of the men of tomorrow as well.  Published in 1895, this masterpiece of invention captivated readers on the threshold of a new century. Thanks to Wells’s expert storytelling and provocative insight, The Time Machine will continue to enthrall readers for generations to come.