If you have been following my journey with this series, you probably know that I struggled with the first two novels. I found that I really had to push myself to finish them. I personally found it really hard to follow and keep track of all of the characters within the story. However, Morning Star was a completely different experience for me! Maybe I finally got a firm grasp of all of the characters or maybe I just felt more attached to the story this time around, but I absolutely loved Morning Star and I could not put it down!

Can you believe I was actually considering to not continue with this series after Golden Son? I think I was super frustrated with the fact that I found the story so hard to follow yet everyone else gave it so much praise. I started to think maybe this series just wasn’t for me, but then the ending of Golden Son completely changed my mind. How could I not continue with the series after an ending like that?!

I pre-ordered Morning Star as I figured I should probably read it immediately after its release considering it is the last book in a trilogy and I didn’t want to be spoiled. Then I went to the Pierce Brown book discussion and signing at Indigo Bay Bloor in Toronto and that just further pumped me up and made me want to finish the series. Oh man, am I glad that I did.

Morning Star had me hooked from the first chapter. I actually went back and forth between reading the book and listening the audiobook. I think the audiobook actually helped me this time around, the narrator did a fantastic job. He even had different accents for each of the characters depending on their colours and which planets they were from. It was a fantastic listening experience!

Morning Star was filled with fantastic action/battle scenes as well as tragically sad scenes. And somehow, in the midst of all that, there was even humour…mostly from the mouth of Sevro. I mean, Pierce Brown even managed to fit in a hilarious “Bye Felicia”. I mean you have to be one hell of an amazing writer to be able to squeeze that in to a novel that is generally more serious in nature.

There are a few chapters towards the end of the novel that had me scared, then nervous, then happy, then excited, then scared all over again. The last quarter or so of Morning Star had me completely on the edge of my seat. It was literally giving me anxiety, which is something I did not experience while reading either Red Rising or Golden Son.

That ending, oh that ending. It was just so satisfying. I mean, I was definitely terrified for half a second, but it turned out just so perfectly. Not only was it a great ending to the novel on its own, but it was a phenomenal ending to a wonderful trilogy.

I think it’s safe to say I really thoroughly enjoyed Morning Star and I can’t wait to read more from the wonderful Pierce Brown in the future! 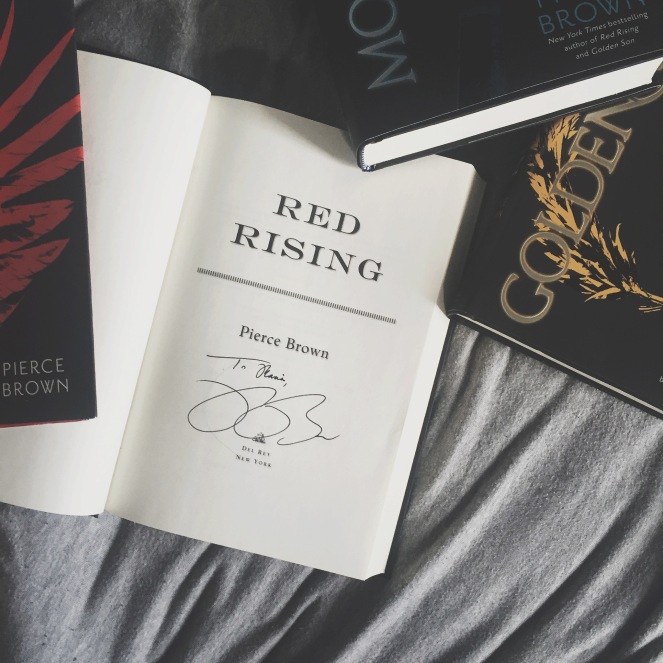