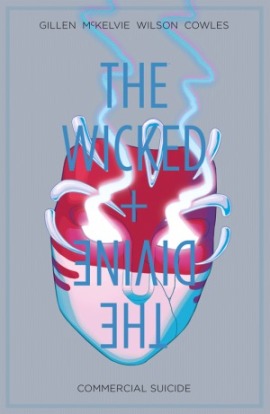 The second I opened up this volume of The Wicked + The Divine, I knew something was different. The art changed. At first I thought I was going completely insane. Why would the art change? Jamie McKelvie’s name is still on the front cover. Yet, I knew something was different. Before I even began to read the first page, I skimmed through the volume. I was right! The art style seemed to change within every individual issue. I was slightly confused by this decision as there was no explanation as to why this was happening. I decided to begin reading anyway, hoping for some sort of reasoning behind this strange choice.

Commercial Suicide begins with no explanation as to what the hell happened at the end of the second volume, Fandemonium. I expected it to at least be touched on a little, but nothing was really explained until the very last few pages of this volume, and even that was pretty vague.

This volume felt a bit more like a filler volume than anything else. It was filled with backstories about the different gods and who they were as humans before becoming the gods that they are now. I usually love a good backstory, but I think I was so preoccupied with finding out the reasoning behind the final events in the second volume, that I really didn’t care too much about their backstories at that particular moment.

However, one backstory did stand out to me, the story of Baphomet and The Morrigan. I believed their story and it felt the most relatable and realistic. You really got to see the human side of them through their story and I really enjoyed reading about them.

Although a majority of this volume was filled with backstories, we did learn some very important details that will definitely play a part in the future story of this series.

As I mentioned earlier, the art style changed from issue to issue. At first I didn’t understand why. I thought maybe Jamie McKelvie was changing up his style per issue to show each individual personality of the gods, seeing as each issue was told from the perspective of a different god. As the volume went on, I actually thought that was a super cool idea. Then I thought about it a bit more and realized that was kind of already done via changing their thought bubbles and the typefaces used in previous volumes.

It wasn’t until I got to the very end of the volume where it was finally explained why each issue had a different art style. There were guest artists. Duh. I don’t know why I didn’t think of that from the beginning. Suddenly, the different art styles make a lot more sense. I’m still not sure how I feel about this decision, but I think experimenting with this idea was pretty cool. However, I think one volume is enough. I’d like to see the original art style throughout the entire next volume. It was one of the main things that I loved so much about the first two volumes!

Of course, Commercial Suicide left us with yet another cliffhanger. At least Kieron Gillen acknowledged it and let us know it was coming with a clever little title page. I just want to know what the hell is happening!!!

Although this was the weakest volume of The Wicked + The Divine so far for me personally, the story is still really intriguing and these damn cliffhangers are definitely going to keep me coming back for more.