It’s time for another Top 10 Tuesday!!! For those of you who don’t know, Top 10 Tuesday is a weekly meme hosted by the folks over at The Broke and the Bookish! This week’s Top 10 Tuesday theme talks about our Top 10 Pleasant Surprises! These are the books that we weren’t necessarily expecting to love. Maybe the genres were out of our comfort zones or maybe we heard mixed reviews and didn’t have very high expectations. Or maybe we knew nothing about these novels and went in blind with no expectations at all! These are the Top 10 books that surprised me in how much I loved them!

A Court of Thorns & Roses

I don’t usually care for fairy tale retellings. I honestly tend to avoid them, but A Court of Thorns and Roses had so much hype surrounding it. I usually wait for the hype to die down a little before I dive in to a popular novel, which is what I decided to do for A Court Of Thorns and Roses. I actually read it quite recently and I was quite shocked my how much I actually enjoyed it! I wasn’t expecting to at all so it was quite the pleasant surprise! 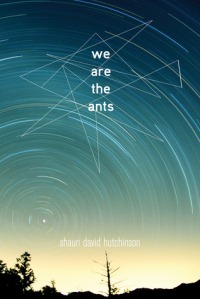 We Are The Ants

It’s no secret that I consider We Are The Ants to be my favourite novel of 2016. Yes, I know it’s only February. I received an ARC of this novel from Simon & Schuster Canada at the end of last  year without knowing anything about it. I went in blind and a little deterred from the mention of aliens in the synopsis. Let’s just say this book blew me away and I was not expecting it. Shaun David Hutchinson has become one of my favourite authors since!

This was another book/graphic novel that I went into blindly. I didn’t even realize it was by Robert Kirkman at first. I just picked it up based on its description alone. I wasn’t sure what to expect with it and it turned out that I liked it quite a lot despite some mixed reviews! It’s also going to be turned into a television series soon which I’m super excited about!

From A Distant Star

From A Distant Star was a book that I requested via NetGalley on a whim. Once again I wasn’t really to sure what it was about, but I knew it mentioned something to do with aliens. I’m not huge on aliens within fiction so I wasn’t expecting to enjoy this too much, especially because it also includes a contemporary twist to it. I ended up really thoroughly enjoying this story which I definitely was not expecting!

Where They Found Her

Where They Found Her was another ARC that I had received for an honest review and all I knew about it was that it was a psychological thriller. I had just read all three of Gillian Flynn’s books recently as well as The Girl On The Train which had been compared to Gone Girl. I was unsure about getting to invested in yet another book that claimed to be for fans of Gone Girl, so I went into Where They Found Her with low expectations…and I loved it! It was full of twists and turns and kept me on the edge of my seat the entire time!

The Half Bad trilogy has become one of my favourite trilogies of all time. The third and final installment is one of my most highly anticipated books of this year…and I expected none of that when I started Half Bad. I picked up as a bargain book off of the Chapters/Indigo website on a whim and I’m so glad that I did!

I’ve read a few of Ellen Hopkin’s books before I read Identical and I did definitely enjoy them, but none really stood out from one another. That is until I read Identical. I went into it knowing I would like it, but I never expected to love it as much as I did and to be as shocked as I was!

When I picked up Bird Box I honestly had no idea what it was about. I liked the cover, the eBook was on sale…enough said. I really loved the creativity of this story and how subtly dark and creepy it was. I may have to pick this one up again soon for a re-read.

All The Light We Cannot See

I don’t really read Historical Fiction. I just don’t. It’s a genre that I can’t really get into unless it takes place during World War II. For whatever reason, that time period is the only one that I find interesting enough to read about within Historical Fiction. I really didn’t think I would enjoy All The Light We Cannot See and the only thing that made me give it a try was the fact that it did take place in World War II and everyone and their dog was reading it. I’m glad I picked it up as it was one of the most beautiful stories I have ever read!

Here’s another Historical Fiction that surprisingly does NOT take place during the second World War. I picked up The Alienist purely because I was on a Beat Generation kick and I knew that Caleb Carr was the son of Lucien Carr. Upon further research, The Alienist was one of the most popular books on the market when it first came out. Seriously, it was crazy successful and it’s clear after reading it why that would be! It’s so finely detailed and well researched I can’t even explain it. Definitely worth the read!

And there you have it! My Top 10 Pleasant Surprises! Do you agree with any of my picks? Which books did you fall in love with that you weren’t expecting to?