March is looking like a fantastic month for some new book releases! Here are a few of the books that I am the most excited to get my hands on! What are you looking forward to reading this month? Do we have similar choices? Am I forgetting anything?

The Passenger by Lisa Lutz

Goodreads synopsis: Forty-eight hours after leaving her husband’s body at the base of the stairs, Tanya Dubois cashes in her credit cards, dyes her hair brown, demands a new name from a shadowy voice over the phone, and flees town. It’s not the first time. She meets Blue, a female bartender who recognizes the hunted look in a fugitive’s eyes and offers her a place to stay. With dwindling choices, Tanya-now-Amelia accepts. An uneasy―and dangerous―alliance is born. It’s almost impossible to live off the grid today, but Amelia-now-Debra and Blue have the courage, the ingenuity, and the desperation, to try. Hopscotching from city to city, Debra especially is chased by a very dark secret…can she outrun her past? With heart-stopping escapes and devious deceptions, The Passenger is an amazing psychological thriller about defining yourself while you pursue your path to survival. One thing is certain: the ride will leave you breathless.

Rebel of the Sands by Alwyn Hamilton

Goodreads synopsis: She’s more gunpowder than girl—and the fate of the desert lies in her hands. Mortals rule the desert nation of Miraji, but mystical beasts still roam the wild and barren wastes, and rumor has it that somewhere, djinni still practice their magic. But there’s nothing mystical or magical about Dustwalk, the dead-end town that Amani can’t wait to escape from. Destined to wind up “wed or dead,” Amani’s counting on her sharpshooting skills to get her out of Dustwalk. When she meets Jin, a mysterious and devastatingly handsome foreigner, in a shooting contest, she figures he’s the perfect escape route. But in all her years spent dreaming of leaving home, she never imagined she’d gallop away on a mythical horse, fleeing the murderous Sultan’s army, with a fugitive who’s wanted for treason. And she’d never have predicted she’d fall in love with him…or that he’d help her unlock the powerful truth of who she really is. 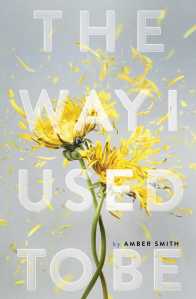 The Way I Used To Be by Amber Smith

Goodreads synopsis: In the tradition of Speak, this extraordinary debut novel shares the unforgettable story of a young woman as she struggles to find strength in the aftermath of an assault. Eden was always good at being good. Starting high school didn’t change who she was. But the night her brother’s best friend rapes her, Eden’s world capsizes. What was once simple, is now complex. What Eden once loved—who she once loved—she now hates. What she thought she knew to be true, is now lies. Nothing makes sense anymore, and she knows she’s supposed to tell someone what happened but she can’t. So she buries it instead. And she buries the way she used to be. Told in four parts—freshman, sophomore, junior, and senior year—this provocative debut reveals the deep cuts of trauma. But it also demonstrates one young woman’s strength as she navigates the disappointment and unbearable pains of adolescence, of first love and first heartbreak, of friendships broken and rebuilt, and while learning to embrace a power of survival she never knew she had hidden within her heart. 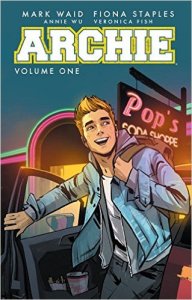 Goodreads synopsis: ARCHIE, one of the longest-running titles in comic book history, is rebooted here in this full-color collection that brings together two of the most talented creators in comics, Mark Waid and Fiona Staples. Together they create a surprising and definitive take on Archie’s origin–a story that has never been told. The book will captures the bite and hilarious edge of Archie’s original tales in a modern, forward-looking manner, while still retaining the character’s all-ages appeal. If classic Archie is a Saturday morning cartoon, this new series is prime time!

Half Lost by Sally Green

Goodreads synopsis: Nathan Byrn is running again. The Alliance of Free Witches has been all but destroyed. Scattered and demoralized, constantly pursued by the Council’s Hunters, only a bold new strategy can save the rebels from total defeat. They need the missing half of Gabriel’s amulet—an ancient artifact with the power to render its bearer invincible in battle. But the amulet’s guardian—the reclusive and awesomely powerful witch Ledger – has her own agenda. To win her trust, Nathan must travel to America and persuade her to give him the amulet. Combined with the Gifts he has inherited from Marcus, the amulet might just be enough to turn the tide for the Alliance and end the bloody civil war between Black and White witches once and for all… 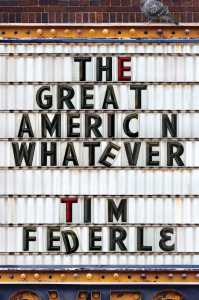 The Great American Whatever by Tim Federle

Goodreads synopsis: Quinn Roberts is a sixteen-year-old smart aleck and Hollywood hopeful whose only worry used to be writing convincing dialogue for the movies he made with his sister Annabeth. Of course, that was all before—before Quinn stopped going to school, before his mom started sleeping on the sofa…and before Annabeth was killed in a car accident. Enter Geoff, Quinn’s best friend who insists it’s time that Quinn came out—at least from hibernation. One haircut later, Geoff drags Quinn to his first college party, where instead of nursing his pain, he meets a guy—a hot one—and falls hard. What follows is an upside-down week in which Quinn begins imagining his future as a screenplay that might actually have a happily-ever-after ending—if, that is, he can finally step back into the starring role of his own life story.