Is it already time to decide what my TBR is going to be this December? Insane. I feel like I was just writing my November TBR the other day! Just like any other month, I tend not to follow my TBRs very well at all. Keep in mind that these books are what I feel like reading at this particular moment in time, but could change as the month goes on! What do you plan on reading during the month of December?! Do we have any similar picks?

Goodreads synopsis: This morning, Kady thought breaking up with Ezra was the hardest thing she’d have to do. This afternoon, her planet was invaded. The year is 2575, and two rival megacorporations are at war over a planet that’s little more than an ice-covered speck at the edge of the universe. Too bad nobody thought to warn the people living on it. With enemy fire raining down on them, Kady and Ezra—who are barely even talking to each other—are forced to fight their way onto an evacuating fleet, with an enemy warship in hot pursuit. But their problems are just getting started. A deadly plague has broken out and is mutating, with terrifying results; the fleet’s AI, which should be protecting them, may actually be their enemy; and nobody in charge will say what’s really going on. As Kady hacks into a tangled web of data to find the truth, it’s clear only one person can help her bring it all to light: the ex-boyfriend she swore she’d never speak to again. Told through a fascinating dossier of hacked documents—including emails, schematics, military files, IMs, medical reports, interviews, and more—Illuminae is the first book in a heart-stopping, high-octane trilogy about lives interrupted, the price of truth, and the courage of everyday heroes. 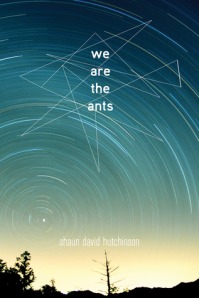 We Are The Ants

Goodreads synopsis: Henry Denton doesn’t know why the aliens chose to abduct him when he was thirteen, and he doesn’t know why they continue to steal him from his bed and take him aboard their ship. He doesn’t know why the world is going to end or why the aliens have offered him the opportunity to avert the impending disaster by pressing a big red button. But they have. And they’ve only given him 144 days to make up his mind. Since the suicide of his boyfriend, Jesse, Henry has been adrift. He’s become estranged from his best friend, started hooking up with his sworn enemy, and his family is oblivious to everything that’s going on around them. As far as Henry is concerned, a world without Jesse is a world he isn’t sure is worth saving. Until he meets Diego Vega, an artist with a secret past who forces Henry to question his beliefs, his place in the universe, and whether any of it really matters. But before Henry can save the world, he’s got to figure out how to save himself, and the aliens haven’t given him a button for that. 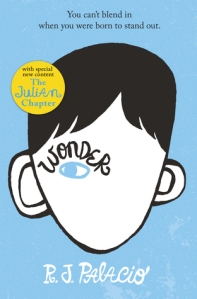 Goodreads synopsis: You can’t blend in when you were born to stand out. My name is August. I won’t describe what I look like. Whatever you’re thinking, it’s probably worse. August Pullman wants to be an ordinary ten-year-old. He does ordinary things. He eats ice cream. He plays on his Xbox. He feels ordinary – inside. But Auggie is far from ordinary. Ordinary kids don’t make other ordinary kids run away screaming in playgrounds. Ordinary kids don’t get stared at wherever they go. Born with a terrible facial abnormality, Auggie has been home-schooled by his parents his whole life, in an attempt to protect him from the cruelty of the outside world. Now, for the first time, he’s being sent to a real school – and he’s dreading it. All he wants is to be accepted – but can he convince his new classmates that he’s just like them, underneath it all? Narrated by Auggie and the people around him whose lives he touches forever, Wonder is a funny, frank, astonishingly moving debut to read in one sitting, pass on to others, and remember long after the final page. 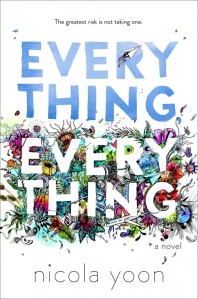 Goodreads synopsis: My disease is as rare as it is famous. Basically, I’m allergic to the world. I don’t leave my house, have not left my house in seventeen years. The only people I ever see are my mom and my nurse, Carla. But then one day, a moving truck arrives next door. I look out my window, and I see him. He’s tall, lean and wearing all black—black T-shirt, black jeans, black sneakers, and a black knit cap that covers his hair completely. He catches me looking and stares at me. I stare right back. His name is Olly. Maybe we can’t predict the future, but we can predict some things. For example, I am certainly going to fall in love with Olly. It’s almost certainly going to be a disaster. 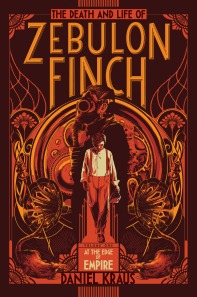 The Death & Life of Zebulon Finch

*this was on a previous TBR and I started reading it, but I had unfortunately hit a reading slump. I hope to finish it this month instead!