I can’t believe June is here already! That was fast! Here you will find a list of books that I plan to read this month. Obviously, I’m not very strict about my TBR lists as I tend to stray from the books I’ve planned or I just didn’t have the time to get to them all. Here is what I hope to read this month!

In Real Life: My Journey to a Pixelated World

Goodreads Synopsis: A confessional, uplifting memoir from the beloved YouTube personality. It’s not where you begin that matters. It’s where you end up. Twenty-three year old Joey Graceffa has captured the hearts of millions of teens and young adults through his playful, sweet, and inspirational YouTube presence (not to mention his sparkling eyes and perfect hair). Yet, Joey wasn’t always comfortable in his skin, and in this candid memoir, he thoughtfully looks back on his journey from pain to pride, self-doubt to self-acceptance. To his fans, Joey is that best friend who always captures the brighter side of life but also isn’t afraid to get real. In the pages of his first book, he opens up about his years of struggling with family hardships and troubles at school, with cruel bullying and the sting of rejection. He tells of first loves and losses, embarrassing moments and surprising discoveries, loneliness, laughter, and life-changing forks in the road, showing us the incalculable value of finally finding and following your true passion in this world. Funny, warm-hearted, and inspiring, Joey Graceffa’s story is a welcome reminder that it’s not where you begin that matters, but where you end up.

Simon Vs. The Homo Sapiens Agenda

Goodreads synopsis: Sixteen-year-old and not-so-openly gay Simon Spier prefers to save his drama for the school musical. But when an email falls into the wrong hands, his secret is at risk of being thrust into the spotlight. Now Simon is actually being blackmailed: if he doesn’t play wingman for class clown Martin, his sexual identity will become everyone’s business. Worse, the privacy of Blue, the pen name of the boy he’s been emailing, will be compromised. With some messy dynamics emerging in his once tight-knit group of friends, and his email correspondence with Blue growing more flirtatious every day, Simon’s junior year has suddenly gotten all kinds of complicated. Now, change-averse Simon has to find a way to step out of his comfort zone before he’s pushed out—without alienating his friends, compromising himself, or fumbling a shot at happiness with the most confusing, adorable guy he’s never met.

Goodreads synopsis: Ryan Dean West is a fourteen-year-old junior at a boarding school for rich kids in the Pacific Northwest. He’s living in Opportunity Hall, the dorm for troublemakers, and rooming with the biggest bully on the rugby team. And he’s madly in love with his best friend Annie, who thinks of him as a little boy. With the help of his sense of humor, rugby buddies, and his penchant for doodling comics, Ryan Dean manages to survive life’s complications and even find some happiness along the way. But when the unthinkable happens, he has to figure out how to hold on to what’s important, even when it feels like everything has fallen apart. Filled with hand-drawn info-graphics and illustrations and told in a pitch-perfect voice, this realistic depiction of a teen’s experience strikes an exceptional balance of hilarious and heartbreaking. 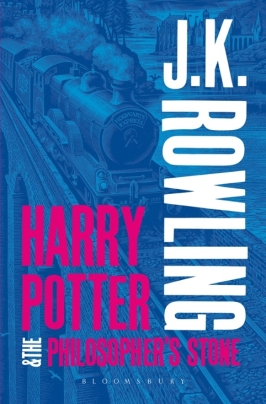 Goodreads synopsis: When a letter arrives for unhappy but ordinary Harry Potter, a decade-old secret is revealed to him that apparently he’s the last to know. His parents were wizards, killed by a Dark Lord’s curse when Harry was just a baby, and which he somehow survived. Leaving his unsympathetic aunt and uncle for Hogwarts, a wizarding school brimming with ghosts and enchantments, Harry stumbles upon a sinister adventure when he finds a three-headed dog guarding a room on the third floor. Then he hears of a missing stone with astonishing powers which could be valuable, dangerous, or both.

Goodreads synopsis: It’s 1987. Marcus Lopez hates school. His grades suck. The jocks are hassling his friends. He can’t focus in class. But the jocks are the children of Joseph Stalin’s top assassin, the teachers are members of an ancient league of assassins, the class he’s failing is “Dismemberment 101,” and his crush has a double-digit body count. Welcome to the most brutal high school on earth, where the world’s top crime families send the next generation of assassins to be trained. Murder is an art. Killing is a craft. At Kings Dominion School for the Deadly Arts, the dagger in your back isn’t always metaphorical. Collecting the first arc of the most critically acclaimed new series of 2014, by writer RICK REMENDER (BLACK SCIENCE, Fear Agent) and rising star artist WESLEY CRAIG (Batman). Experience the 1980s underground through the eyes of the world’s most damaged and dangerous teenagers. Collects DEADLY CLASS #1-6.