Here we have yet another list of all of the thrifted books I have purchased during the month of April 2015. Like I have said many times, thrifting is a great way to purchase fantastic books at fantastic prices. 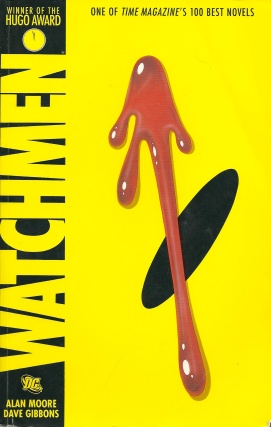 Goodreads Synopsis: This Hugo Award-winning graphic novel chronicles the fall from grace of a group of super-heroes plagued by all-too-human failings. Along the way, the concept of the super-hero is dissected as the heroes are stalked by an unknown assassin. One of the most influential graphic novels of all time and a perennial best-seller, Watchmen has been studied on college campuses across the nation and is considered a gateway title, leading readers to other graphic novels such as V for Vendetta, Batman: The Dark Knight Returns and The Sandman series.

To Kill A Mockingbird

Goodreads Synopsis: The unforgettable novel of a childhood in a sleepy Southern town and the crisis of conscience that rocked it, To Kill A Mockingbird became both an instant bestseller and a critical success when it was first published in 1960. It went on to win the Pulitzer Prize in 1961 and was later made into an Academy Award-winning film, also a classic. Compassionate, dramatic, and deeply moving, To Kill A Mockingbird takes readers to the roots of human behavior – to innocence and experience, kindness and cruelty, love and hatred, humor and pathos. Now with over 18 million copies in print and translated into ten languages, this regional story by a young Alabama woman claims universal appeal. Harper Lee always considered her book to be a simple love story. Today it is regarded as a masterpiece of American literature.

Goodreads Synopsis: On a May afternoon in 1943, an Army Air Forces bomber crashed into the Pacific Ocean and disappeared, leaving only a spray of debris and a slick of oil, gasoline, and blood. Then, on the ocean surface, a face appeared. It was that of a young lieutenant, the plane’s bombardier, who was struggling to a life raft and pulling himself aboard. So began one of the most extraordinary odysseys of the Second World War. The lieutenant’s name was Louis Zamperini. In boyhood, he’d been a cunning and incorrigible delinquent, breaking into houses, brawling, and fleeing his home to ride the rails. As a teenager, he had channeled his defiance into running, discovering a prodigious talent that had carried him to the Berlin Olympics and within sight of the four-minute mile. But when war had come, the athlete had become an airman, embarking on a journey that led to his doomed flight, a tiny raft, and a drift into the unknown. Ahead of Zamperini lay thousands of miles of open ocean, leaping sharks, a foundering raft, thirst and starvation, enemy aircraft, and, beyond, a trial even greater. Driven to the limits of endurance, Zamperini would answer desperation with ingenuity; suffering with hope, resolve, and humor; brutality with rebellion. His fate, whether triumph or tragedy, would be suspended on the fraying wire of his will. In her long-awaited new book, Laura Hillenbrand writes with the same rich and vivid narrative voice she displayed in Seabiscuit. Telling an unforgettable story of a man’s journey into extremity, Unbroken is a testament to the resilience of the human mind, body, and spirit.

Goodreads Synopsis: In Crank, Ellen Hopkins chronicles the turbulent and often disturbing relationship between Kristina, a character based on her own daughter, and the “monster,” the highly addictive drug crystal meth, or “crank.” Kristina is introduced to the drug while visiting her largely absent and ne’er-do-well father. While under the influence of the monster, Kristina discovers her sexy alter-ego, Bree: “there is no perfect daughter, / no gifted high school junior, / no Kristina Georgia Snow. / There is only Bree.” Bree will do all the things good girl Kristina won’t, including attracting the attention of dangerous boys who can provide her with a steady flow of crank.

Goodreads Synopsis: THE HUGO AND NEBULA AWARD WINNING NOVEL Orson Scott Card’s beloved classic Ender’s Game is now a major motion picture. Andrew “Ender” Wiggin thinks he is playing computer simulated war games; he is, in fact, engaged in something far more desperate.  Ender may be the military genius Earth desperately needs in a war against an alien enemy seeking to destroy all human life. The only way to find out is to throw Ender into ever harsher training, to chip away and find the diamond inside, or destroy him utterly. Ender Wiggin is six years old when it begins. He will grow up fast. “Orson Scott Card makes a strong case for being the best writer science fiction has to offer.” —The Houston Post This movie tie-in edition features cover art from the Summit Entertainment film starring Harrison Ford, Ben Kingsley, and Asa Butterfield as Ender Wiggin.

The Sea of Monsters (Percy Jackson and the Olympians #2)

Goodreads Synopsis: The heroic son of Poseidon makes an action-packed comeback in the second must-read installment of Rick Riordan’s amazing young readers series. Starring Percy Jackson, a “half blood” whose mother is human and whose father is the God of the Sea, Riordan’s series combines cliffhanger adventure and Greek mythology lessons that results in true page-turners that get better with each installment. In this episode, The Sea of Monsters, Percy sets out to retrieve the Golden Fleece before his summer camp is destroyed, surpassing the first book’s drama and setting the stage for more thrills to come.

Her Dark Curiosity (The Madman’s Daughter #2)

Goodreads Synopsis: Months have passed since Juliet Moreau returned to civilization after escaping her father’s island—and the secrets she left behind. Now, back in London once more, she is rebuilding the life she once knew and trying to forget Dr. Moreau’s horrific legacy—though someone, or something, hasn’t forgotten her. As people close to Juliet fall victim one by one to a murderer who leaves a macabre calling card of three clawlike slashes, Juliet fears one of her father’s creations may have also escaped the island. She is determined to find the killer before Scotland Yard does, though it means awakening sides of herself she had thought long banished, and facing loves from her past she never expected to see again. As Juliet strives to stop a killer while searching for a serum to cure her own worsening illness, she finds herself once more in the midst of a world of scandal and danger. Her heart torn in two, past bubbling to the surface, life threatened by an obsessive killer—Juliet will be lucky to escape alive. With inspiration from Robert Louis Stevenson’s The Strange Case of Dr. Jekyll and Mr. Hyde, this is a tantalizing mystery about the hidden natures of those we love and how far we’ll go to save them from themselves. Goodreads Synopsis: Something is out there, something terrifying that must not be seen. One glimpse of it, and a person is driven to deadly violence. No one knows what it is or where it came from. Five years after it began, a handful of scattered survivors remains, including Malorie and her two young children. Living in an abandoned house near the river, she has dreamed of fleeing to a place where they might be safe. Now that the boy and girl are four, it’s time to go, but the journey ahead will be terrifying: twenty miles downriver in a rowboat–blindfolded–with nothing to rely on but her wits and the children’s trained ears. One wrong choice and they will die. Something is following them all the while, but is it man, animal, or monster?